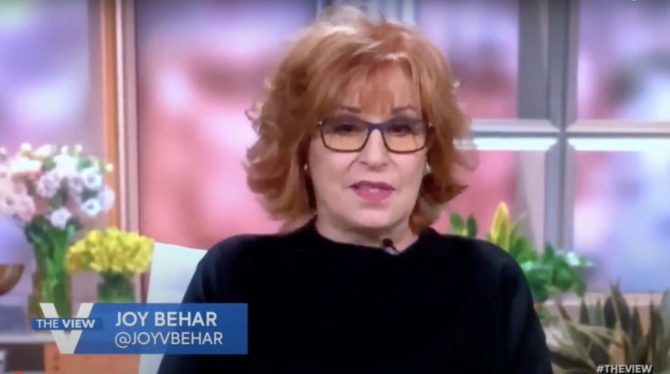 The ladies were talking about Carl Nassib becoming the first openly gay active player in the NFL when he came out on Instagram earlier this week. Towards the end of the conversation, Behar said, “You know after they said penetration in the end zone they lost me.”

Yikes! This joke from Joy Behar during a discussion of the first active gay player in the NFL.

"After they said penetration in the end zone, they lost me!" pic.twitter.com/GJgqTtL5yO

Just so we’re clear, we like Joy. She’s smart, sassy, and she’s not afraid to call Meghan McCain out on her constant bullsh*t. And we don’t think she’s a homophobe. She’s been speaking out in support of LGBTQ people since long before it was fashionable to do so. That said, her joke was homophobic and she should issue an apology.

The bottom line: Sometimes allies mess up. But as long as they apologize and promise to do better in the future, we can move on because they’re not actively trying to cause us harm or strip away our rights. That’s how forgiveness works.

Then there were the tweets…

Joy Behar makes a blatant homophobic comment.
Will there be outrage? Will she be cancelled?
No, because she's a Liberal.

“Ana, after they said penetration in the end zone, they lost me”

All of the hosts laughed, except for McCain, the only Conservative.https://t.co/uTIDWrlaXq

@ABC joy behar should be fired for her homophonic joke referring to Carl Nassib. A simple apology is not acceptable.

Joy Behar made a lousy, homophobic buttsex joke on the air. Not as bad as Bette Midler's "feminist" misuse of the n-word, but still, pretty bad, pretty bad. Same old "it's ok to be racist/sexist/homophobe if you're a Democrat" bullshit, as always.

So it's "inappropriate" when Joy Behar says it, but it would have been "homophobic hate speech" if Meghan McCain said it. https://t.co/pNl4KHxsl0

@TheView Joy Behar should be cancelled for making a homophobic statement about a Gay football player. I plan on a lawsuit if she isn't fired. She let her true feelings show.

@TheView Again, Joy Behar is inappropriate, nasty and out of touch. Time for her to retire!!!! Or, better yet, fired!!!

I have two gay grandsons. Both are NFL fans and we’re so excited Carl Nassib took a courageous step. Opening doors and making them feel more accepted. They both have horrific stories of bullying. Nassib comes out, they are encouraged, then Joy Behar Gay Bashed. Very sad.

Joy Behar can make homophobic comments on daytime TV, and absolutely nothing will happen.

How come @JoyVBehar cracked a homophobic joke the other day on the @TheView about “packing in the end zone,” immediately went on camera to state it would be ‘swept under the rug,’ and not a peep from journalists?

If this had been said by anybody else, especially on the right, JOY BEHAR would be demanding they be fired!! Let’s demand she be removed from THE VIEW!!!! Please retweet!!! https://t.co/fpwVg8JdlS

Shame on the @TheView for allowing Joy Behar make a joke of Carl Nassibs coming out. Why is nothing being done to this bully? I bet if she was a republican you would have fired her. “Penetration on the end zone” said by Behar. Absolutely disgusting of her. #cancelbehar

Seriously, we had NO IDEA we had SO MANY allies on the right. Imagine if all of these people who are so outraged at Behar on our behalf took a moment to write to their senators and urge them to pass the Equality Act, or call their governors and tell them to quit signing transphobic bills into law, we could end anti-LGBTQ discrimination in no time!