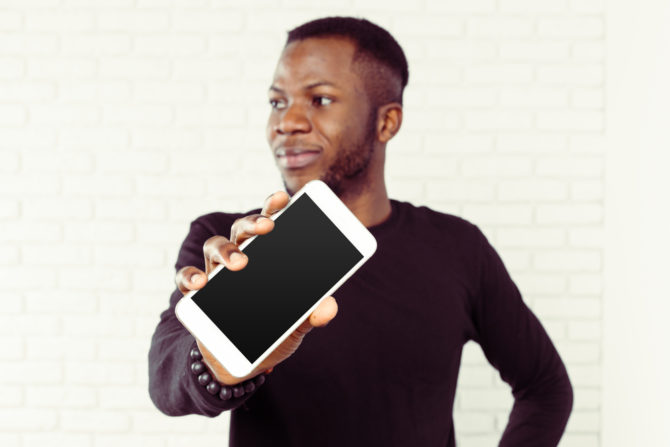 What a difference a new country can make.

It took only an eight-hour bus ride, from Lviv, Ukraine, to Kraków, Poland, for “black” to be back. (I spent half of the travel time waiting to clear both countries’ traffic-jammed border controls.) After weeks of Ukrainian men on Grindr uttering nary a word about my race, suddenly, in Poland, guy after guy was using it as bait (“I love black men”) and as a weapon (yep, the dreaded N-bomb explodes again). But this time, I fought back–and won the battle.

One misspelled N-word on Grindr in Wroclaw set the wheels in motion on a course to justice, if not for all, at least for me and for other gay black men on the dating app.

I previously had spent nearly two months in Ukraine, hitting three different cities (Odessa, Kiev, and Lviv). As with all extended stays in foreign countries, I had a series of highs and lows.

The people in Odessa were spectacularly unfriendly, and one woman in Kiev started angrily shouting at me for no apparent reason as I walked by the bus stop where she was waiting one otherwise quiet Sunday morning. I wondered if the color of my skin, a rarity in the snow-white ex-Soviet bloc country, had sparked her outrage. But I don’t speak Ukrainian and can’t even decipher the Cyrillic alphabet that’s exclusively in use in Ukraine, so I chalked up her peculiar behavior to getting up on the wrong side of a cold, lonely bed.

For the most part, though, Ukrainian locals were as lovely as the city centers of Kiev and Lviv. Even the boys on Grindr were mostly well-behaved. As I told a Kievan named Oles when he respectfully referred to the no-sex policy I’d laid out in my profile, gay men on Grindr in Ukraine were so polite.

He had no idea what “polite” meant and must have taken it as an insult, because after weeks of pursuing me, he disappeared before we ever met. I got to the face-to-face stage with only five men over my two months in Ukraine, but for almost the entire time, none of the hundreds of men who talked to me on Grindr mentioned my race.

It wasn’t until my final week in the country that it finally came up. “I love black men,” Yevgeny announced shortly after meeting me, as we walked through the streets of downtown Lviv. It was the first time anyone had said that to me in person since I landed in Europe in October of last year, but I’d had such positive experiences with gay Ukraine up to then that I brushed off the clichéd “compliment.”

Then I got to Poland. Over the two and a half weeks that followed? I received more “Sex?” and “What are you looking for?” messages than in any 17-day period since I’ve been using gay dating apps. Coming one after another, it was almost-comically extreme. Less funny was the plethora of racial messages. Almost from the minute I arrived in Kraków, they started pouring in.

“Is it true that all black men have huge c*cks?”

Things got so annoying that I decided to address it directly in my profile:

Dear white boys in Poland: Please stop mentioning my race. I’m black, and I’m proud already. Telling me you like black men won’t impress or flatter me because I don’t care. I assume if you message me you like me, so just say hi and leave it at that.

Polish guys may speak decent English, but they clearly don’t read it. The “black” talk continued to come in waves. One of the first people to message me in Wroclaw wrote, simply, “Escort?”.

I wondered if he would have asked a random white guy the same thing and decided that even if he would, it was too disrespectful not to clap back.

“Stupid niger [sic],” he replied a minute later, followed by a banana emoticon (a monkey reference?).

I didn’t respond. I decided to do something I’d done numerous times before after being called the N-word on Grindr and on Scruff, without ever receiving a response: I reported him on the app?–or rather, I tried to. Each time I completed the process, the same “error” message popped up. Sigh.

After a half-dozen failed attempts, I contacted Grindr Customer Service directly on the website and explained what had happened. Within minutes, an automated email arrived. They were already on the case.

One hour and 15 minutes later, I got another one from someone named Stan that began “Rest assured that Grindr doesn’t not condone or allow this behavior in the community” before requesting more information. I sent him a screen grab of the conversation and of the guy’s profile. Then I favorited it in order to make it easier for him to find.

Two hours and 10 minutes after launching my complaint, I received a mission-accomplished email.

“As outlined in our Terms of Service, our Review Team has banned and removed the profile in question…. I can confirm the profile you reported has been banned from the Grindr platform.”

It took at least twice as many hours for the profile to disappear entirely from the app than it did for my complaint to be addressed, but I was still impressed by how swiftly and decisively justice had been delivered.

The “black” talk kept coming in Poland, but I just moved on to the next message without commenting. I’ve gotten several notes from Polish guys apologizing for the behavior of their fellow gay countrymen. I appreciate their words, but I appreciate Grindr’s even more because for the first time, they backed them up with action.

I know my one victory won’t end racism on dating apps. Surely I’ll be called the N-word on Grindr again. Next time, though, I won’t feel powerless when reading hateful racially charged words from gay men online. Beware, boys. If you’ve been spreading them unchecked, time will soon be up for you, too.