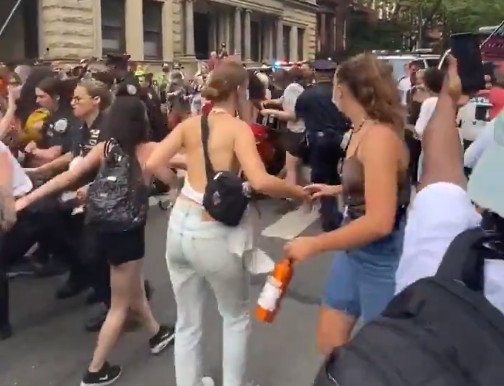 Thousands of demonstrators–queer and straight alike–donned masks and gathered near New York’s Washington Square Park June 28 to show support for the Black Lives Matter and Black Trans Lives Matter movements. What began as a peaceful march then descended into chaos.

Police reportedly tried to arrest two protestors for graffiti. Somehow, simple arrests and peaceful protest then turned to officers beating protestors with batons and using tear gas on the crowd.

Related: New York protest erupts into celebration after arrest of a man who defaced a pride flag

“We got to Washington Square park and the cops fucking ambushed us,” said Chief Equity and Inclusion Officer for the American Civil Liberties Union Amber Hikes via Livestream. “They ran in with bikes, motorcycles and tear gas. They’re trying to arrest peaceful protestors and we’re standing with them.”

Other witnesses also shared their stories on social media.

“Our livestream ended early because the NYPD began pepper spraying, making arrests, and using force. We are carefully monitoring the situation. Please keep each other safe!,” said the Reclaim Pride Coalition via Twitter.  The coalition also posted video of police fighting with protestors in the streets.

Hey @NYCMayor @NYPDShea on the anniversary of stonewall your cops are beating and arresting people pic.twitter.com/UqPNXXtm2r

“Mayor de Blasio and Commissioner Shea, you want to tell us why, on the anniversary of Stonewall, we are, on this day, continuing to protest police brutality?” Cummings seethed. “Stonewall was an act of resistance against the police, and now your cops are f*cking beating and arresting them at a demonstration in Washington Square Park? F*cking resign.”