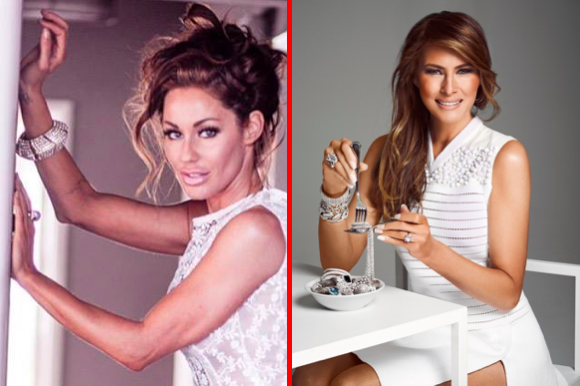 The actress who played Melania Trump in rapper T.I.’s latest music video is speaking out after receiving hate mail and death threats over her portrayal of the First Lady.

Quick backstory: Mrs. Trump, who is the only FLOTUS in history to have nude photographs on the internet, was reportedly very upset after T.I. released a video earlier this month featuring a Melania lookalike doing a strip tease in a fake Oval Office.

Like it or not, she is the first lady and this is the White House. It’s disrespectful and disgusting to portray her this way simply because of politics. These kinds of vulgar attacks only further the divisiveness and bias in our country–it needs to stop.

Melanie Marden is the actress who played FLOTUS in the video. She recently sat down with TMZ to talk about the video’s response how she’s been receiving death threats over it.

“Yeah, I have had some death threats,” she says. “It’s actually unbelievable that people take this so seriously.”

Related: Melania Trump is outraged over being depicted as a stripper in music video

Marden also swung by Inside Edition, where she went into more detail about those death threats, which have included somebody threatening to run her over with their car, another person saying they were going to beat her up with a baseball bat, and someone else hoping she is raped and then murdered.

Marden, who is Canadian, says she’s just “an independent woman trying to make a living” and doesn’t understand why people are so angry with her.

“If I was insulting and degrading her, then it would be one thing,” Marden says. “But I don’t think I was.”

Meanwhile, Grisham has also taken to her personal Twitter account to voice her outrage over the video, calling T.I. “disgusting” and demanding a boycott of his music.

In other news: The midterm elections are coming up. Don’t forget to vote on November 6!