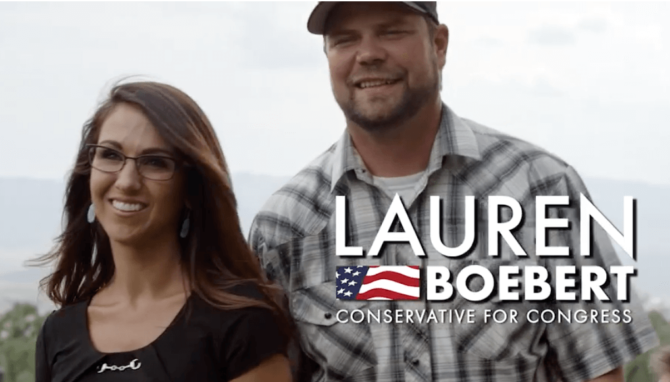 Rep. Lauren Boebert of Colorado just got a crash course in why you shouldn’t insinuate that your political opponents are perverts and pedophiles when your own husband reportedly once pled guilty to exposing himself to a minor.

Last week, the newly-elected Colorado lawmaker fired off a snarky tweet about Democrats turning a blind eye to members of their own party who palled around with sexual predator Jeffrey Epstein.

“Imagine if the Left was as outraged with their political leaders visiting Epstein Island as they are about @TedCruz going to Cancun with his family,” Boebert tweeted.

Imagine if the Left was as outraged with their political leaders visiting Epstein Island as they are about @TedCruz going to Cancun with his family.

Now, here’s where things get awkward. Like, suuuuuper awkward.

According to the report, Jayson was arrested on January 28, 2004 for exposing himself to a group of women, including a 16-year-old girl, at a bowling alley.

The women were talking about their tattoos when he approached to say he had a tattoo on his penis. When the women ignored him, he unzipped his pants to show them.

Jayson initially told officers he “displayed his thumb pretending it was his genitals in a gesture of fun,” but witnesses disputed his account and said it was definitely his penis because “thumbs aren’t 6 inches long.”

According to the New York Post, Jayson later pled guilty to public indecency and lewd exposure and was sentenced to four days in jail plus two years probation.

A year and a half later… Lauren married him!

After tweeting that Democrats are OK with pedophiles, people were quick to remind Boebert about how she’s OK with her husband allegedly flashing an underage girl in public…

For the record, your husband took out his penis in a bowling alley. In. A. Bowling. Alley.

Reminder : Rep Lauren Boebert’s (R-CO-3) husband was arrested for showing his penis to minors in public. She herself has been arrested four times, and may have given tours of the Capitol to terrorists that later attacked Congress. This is what we are dealing with

Where do Americans go to claim asylum from seeing your husband's willy? pic.twitter.com/6zgI2Oo6cr

Some people think Lorena Bobbitt when they hear Lauren Boebert. There is a difference
1. Bobbitt cut her husband's penis off
2. Boebert's husband showed off his penis to underage girls

How many journalists covered up your husband exposing his penis to underage girls at a bowling alley?

Boy is she in for a surprise. ? pic.twitter.com/Nmm4qWg4qS

When is the last time your husband pulled his penis out in front of a minor?

Recently released statistics show that a 16 year old girl is safer in a locker room with a trans woman then they are at a bowling alley with Jayson Boebert.

Hey, tell your husband to stop pulling out his penis.

To be more inclusive, will your husband show his penis at other bowling alleys?

But the story doesn’t end there. Because a few days later, Boehert again made a fool of herself when she tweeted her outrage over Mr. Potato Head dropping the “Mr.” and just being “Potato Head” in an effort to be gender-neutral.

“Mr. Potato Head has now been renamed to be gender inclusive,” the high school dropout raged. “He’s now just going to be called Potato Head. When will the activists demand Joe Biden stops use of the ‘Come On, Man’ catchphrase? For inclusivity’s sake, it should be ‘Come On, Person!'”

Mr. Potato Head has now been renamed to be gender inclusive.

When will the activists demand Joe Biden stops use of the “Come On, Man” catchphrase?

For inclusivity’s sake, it should be “Come On, Person!”

Maybe worry less about Toy Genders and more about your husband exposing himself to teens, K?

I heard your hubby got some ink on HIS Potato Head.🥴

My favorite part of this whole Mr. Potato Head thing is watching people like Lauren Boebert and Marjorie Taylor Greene lose their shit over a plastic potato that stores its own body parts up its ass.

Would your husband expose himself to either version of Potato Head? I bet he would…

Lauren Boebert is more upset about a toy potato than the fact that her husband showed his penis to minors in a bowling alley.

I didn’t think anyone could cure my sexual attraction to potatoes but you have today. God bless.

There are children that know your husband is a man because he showed them.

Do you realize, that unlike your husband who likes to show his wiener to minors in bowling alleys, Potato head does not, and never had, a wiener?

Of course Lauren Boebert is upset about Mr. Potato Head. Everyone knows how much her husband loves showing off his spud to minors.

Hmmm. Somehow we don’t think this is going to stop anytime soon.