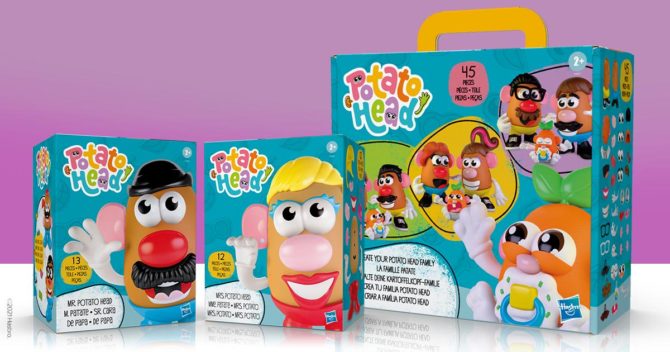 Stalwart of the toy aisle, Toy Story star and cultural icon Potato Head has officially come out as gender-neutral.

Toy company Hasbro announced this week that it will integrate the popular toys Mr. Potato Head and Mrs. Potato Head into a new, gender-free version of the toy. The spud will come with both feminine and masculine accessories, allowing children the chance to explore different configurations of gender roles and styles through play. Fans of the traditional Mr. & Mrs. Potato head shouldn’t fret either; Hasbro says both original versions of the toy will remain on the market in some form as well.

“Hasbro’s decision to introduce Potato Head as a gender-neutral toy is the latest move in a larger movement towards greater diversity and inclusion in toys and media aimed at kids,” Rich Ferraro, GLAAD’s chief communications officer, said in a statement. “By offering a toy that exists outside of the binary of male and female, Hasbro is helping kids to simply see toys as toys, which encourages them to be their authentic selves outside of the pressures of traditional gender norms.”

Mr. Potato Head has occupied toy shelves since 1952; the original version of the toy came with only accessories meant to be used with a real potato. He also became the first toy ever advertised on TV, which helped make him one of the most popular toys ever. Mrs. Potato Head landed on the market in 1953, and the happy couple has enjoyed a long career together since. That includes alternate versions tailored for movie franchises such as Indiana Jones and Star Wars as well as starring roles in the Pixar/Disney Toy Story films.