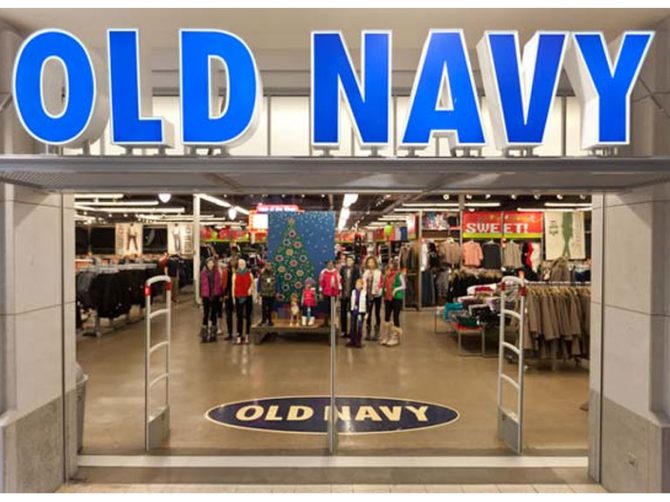 Employees at an Old Navy store in Philadelphia allege that nearly all people of color who work at the location were hidden from view during a recent taping of Queer Eye.

According to Philadelphia magazine, three employees from the Old Navy in Center City say they, along with almost all of their black and brown co-workers, were instructed to “keep out of sight” from the the “all-white crew” when the hit Netflix series came to film there last week.

Not only that, but they alleged 10 white employees from other Old Navy stores were bused in for background shots.

Monae Alvarado has worked at the store for over a year. She took to Facebook to air her grievances, writing:

So they were filming Queer eye (not queer as folk) at my job (Old Navy in Center City Philadelphia) and at my job is nothing but people of color. Most of us did an overnight to help make the store look beautiful. Today they brought all these workers from other store around the region (West Chester, Mount Pocono, and Deptford NJ) and they were all white. They had us standing in the back not to be seen while the other workers from another store get to work on our floor like it’s their store. The shade I tell you. 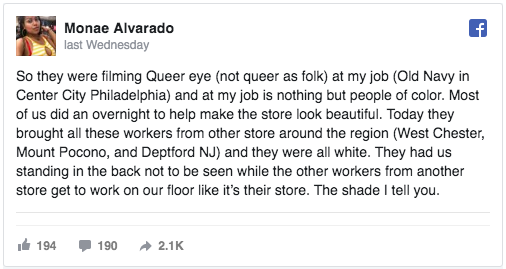 “I was told to go to the back of the store by [Old Navy managers] involved with the production,” Alvarado tells Philadelphia magazine.

She adds, “About six of my fellow co-workers were there, and we were shooed away from the camera as they filmed with these outside employees, who came from West Chester, Mount Pocono, and New Jersey.”

“It immediately seemed odd to me that they were being used to tape at our store location when we already have a diverse group of workers who had been preparing for Queer Eye to come for nearly a week.”

Alvarado says that many of the employees worked overnight to prepare the store for shooting and that they were told they would get to appear in the episode.

“I was super-excited up until the day of and a random group of white folks came in to replace us at our own store.”

Another employee, speaking anonymously to the magazine, adds that they were instructed to go to areas of the store where “I usually don’t work around.”

“It became clear that we weren’t going to be filmed because we hadn’t been asked to sign consent forms, and they made it a point to keep us as far away from the cameras as possible.”

But the company denies everything. In a statement, a spokesperson for Old Navy says:

At Old Navy, we celebrate the diversity of our teams and our customers and foster an environment of inclusion and belonging. We were proud to work with The Queer Eye show to film at our store in Philadelphia and to feature our local store manager on camera. We also worked with additional employees in the area to help ensure the store ran seamlessly for customers, as the location was open for business during filming, and we expect they may appear in background shots. These individuals are reflective of our diverse employee population. We would never select employees to participate – or not – based on race. That is completely inaccurate and against the values we stand for as a company.

“During the filming of Queer Eye season 5, the production team filmed in a Philadelphia-based Old Navy last Wednesday, August 21,” a spokesperson for Netflix says. “Production featured one employee from the retail store, an African American woman, in the segment.”

Queer Eye co-host Tan France admitted on Facebook that he didn’t know what happened behind-the-scenes, but added “I had one person join me on camera, from Old Navy. She was African American. This is the last I will say on this matter.”

But as a third employee from the store, also speaking under anonymity, notes, “That doesn’t explain the need to bring in additional white staffers to be in the background of our store.”

“Having one black person featured on the show when most of us already work there full time is a slap in the face. They would all be better off saying they didn’t want a bunch of black people on their show because they thought it would be ghetto. I’ve seen Queer Eye — they don’t have too many of us on there like that.”

Related: Queer Eye’s Tan France on the pressure of fame: “I represent Asians globally at this point”