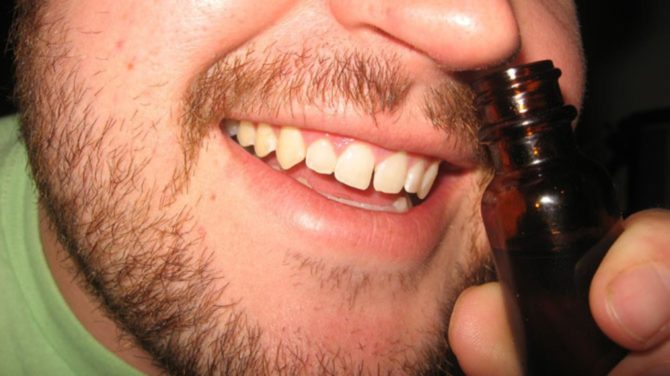 These days, people are all about DIY projects. From backyard gardens to homemade bath and body products, we are a generation that loves to create things ourselves. So it seems only natural that folks have begun making DIY poppers.

“Poppers are expensive, and you barely know what’s in them half the time,” David Dancer, an investigative blogger over at Vice, writes. “That’s why some are skipping the sex shop and braving the risks to home brew.”

Poppers (a.k.a. alkyl nitrites) first became a staple in the gay party scene beginning in the 1970s. Since then, hundreds of international brands have hit the market, the most popular being Rush, Jungle Juice, and Amsterdam. They usually range from $5 to $20 a bottle.

Related: Poppers could cause permanent damage to your eyes

It’s scarily easy to find instructions online explaining how to produce your own poppers. While some connoisseurs home brew to satisfy their own insatiable cravings, others do so to sell online and at gay events. The process is actually super dangerous, so for the love of God, don’t try it at home. Your renters insurance won’t cover the consequences!

For his investigation, Dancer talks to Julian Bendaña, the maker of a popper brand called Double Scorpio, which he developed with his biochemist boyfriend.

Julian said his boyfriend received an acid burn on his leg at one point, and their first batch amounted to little more than a red, noxious gas. But eventually they found chemistry that worked.

“Once we finally got the formula right we were also the control [group],” Julian explains. “[My boyfriend] opened like Moses commanding the Red Seas, so then we knew they were ready to be put on the market.”

Related: “Sudden Sniffing Death” Is Now A Thing Thanks To The New Gay Poppers

Dancer spoke to another popper DIYer who asked to remain anonymous.

“I’ve found that different bottles have different effects, and the feeling I got from purchased bottles was steadily moving into solely head rush territory, with none of the libido enhancement and inhibition reduction I was looking for,” he explains. “Even brands I liked in the past were no longer working the way I wanted.”

That seems to be a common complaint among recreational drug users.

So he started experimenting with his own popper formula.

“It’s not hard to end up in a cloud of explosive vapor that also makes you pass out,” he says. But after “about three batches,” he was able to come up with a decent recipe, though he cautions others from doing so.

“Anyone making highly volatile and flammable compounds without much chemistry experience should be,” he says.

“I’ve only had one incident I might label a close call. I added the acid too quickly to a batch that was too cold and the water rapidly froze while the popper came out of it, and the froth caused everything to spill out of the mixing vessel.”

After finishing his investigation, Dancer says he’s “still hesitant to venture into the homemade poppers circuit.”

“Poppers are easy enough to buy online,” he writes. “Unless you’re hellbent on becoming the queen of gay Etsy, leave the mixology to the pros.”

down and out
43 comments