For a man on fire, look no further than Billy Porter.

The Tony Award and Grammy winner just made history as the first-ever out-gay African-American man ever nominated for Best Actor in a Drama at the Emmys, courtesy of his magnificent turn as the ballroom emcee on Pose. For Porter, the nomination adds momentum to an already soaring career fueled by television roles on shows like Law & Order: SVU and American Horror Story, as well as a stage career that encompassed parts in Angels In America, and the original Broadway cast of Kinky Boots, for which he won his Tony and Grammy Awards.

Queerty snagged some very precious time with Porter just one day before the Pose Season 2 finale to talk about his rocketing rise, his work on the show, and some of his notorious fashion choices. Pose airs Tuesday night on FX.

And you get to live them coming true.

And let it be said, you’ve earned it. You’re doing some amazing work this year with Pose.

Pray has the most dynamic character arc this season.

I think so, in that he becomes an activist. He falls in love.

He becomes more gender-conscious in the ballroom. 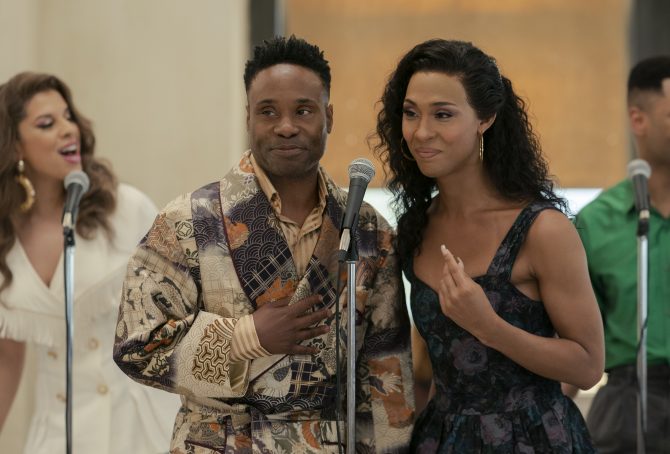 And you get to cover Judy Garland.

And I get to cover Judy Garland!

That’s a dynamic arc. What’s been the most challenging part of this season?

I haven’t done a love scene ever. This is what I’ll say, and this is a very good question: being a leading man. That’s a challenge. I went from entering this process as a character actor to Ryan Murphy and the gang turning me into a leading man and changing the idea of what a leading man can look like. That is challenging for me being a person who has, in my 30-year career never been that. I’ve never been the object of anyone’s affection in 30 years. The first romantic kiss I ever had was last season in episode eight.

That’s mind-boggling to me.

You know they cut our d*cks off…

You know when they first started telling stories about gay people they cut our d*cks off. Then when we started having love stories it was always the white boys. You don’t see black men loving each other.

In the literal sense?

Yes. It’s very clinical. The acting comes in trying to make it look natural and sexy. To me, I had been waiting my whole life to be given that kind of material. My. Whole. Life. You know, they exercise every muscle I have. I read these scripts and I just weep. I’m like thank you Lord. Thank you.

Related: We visited the set of ‘Pose,’ the show that might just save the world

Speaking of, here were you when you found out about your Emmy nomination?

I was in P-Town for vacation.

We were going to have people over, so I was marinating chicken…with the phone beside me going if the phone starts buzzing, that’s good news.

Everyone is so excited that you’re nominated right now: the first out-gay African-American man nominated for Best Actor in a Drama.

And everyone’s excited to see what you’re gonna wear to the Emmys. Since Pose has hit, you’ve become a style icon and a style activist, if that’s even a thing.

I made it a thing. 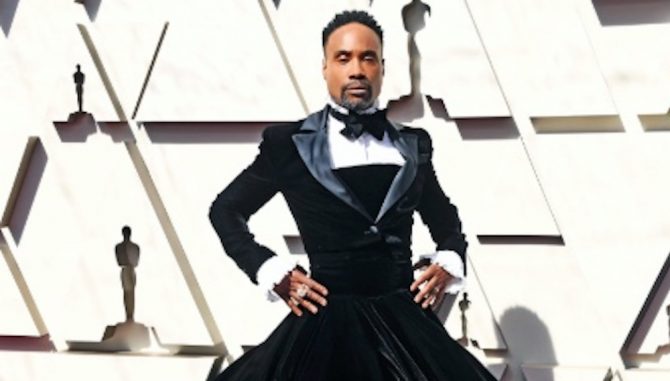 It’s about time somebody did. I read a story this morning about your stylist Sam Ratelle, and how he says the two of you are working to smash the idea of what constitutes male or female fashion. What is so empowering about that for you?

Well, you know, from the minute that I could comprehend thought—so like five years old—my masculinity was in question. We, as queer people, go through our whole lives trying to live up to or being held up to a masculinity standard that our society places on us. I was in those chains until about seven years ago when Kinky Boots happened. And when I finally let myself go and do the very thing I was put on Earth to do and put on that dress and those pumps and that make-up to show the world what a human being looks like, it changed everything. I was always told that side of me was unproducable, was unmarketable and my liability.

And I chose myself even when everyone else said I was wrong. Now here I am on the other side, and the world has cracked open to me because actually did choose myself and my authenticity. I can’t now go hide. I have to show up and do something with that platform. I had no idea that I wanted to play with gender fashion. It just kind of evolved. After Kinky Boots I was comfortable doing it and I had no shame about it anymore. I was going on a recording artist tour and trying to find a new look. I came across Rick Owens. I went in the store and it was all gender-fluid. There were dresses and thick rock & roll platform boots, and I was like this is where I want to be. So that’s where it started. It’s really about a cisgender gay man choosing to wear a dress. I don’t identify as “she.” I don’t identify as “they/them.” I am a “he/him,” and as a man, I am choosing to wear a dress, just like women choose to put on pants.

Sure. So when you started doing this, did you have people saying “Dude, tone it down”?

No. Not really. There were fashion designers and fashion houses that won’t dip into this side of the conversation. They’ve made themselves very clear when we would request male and female things they just wouldn’t answer, or they’d send over two pieces of boy sh*t. It was like we don’t think he should be wearing that. That’s called silencing, and I have seen this before. I’m almost 50, so it’s all good. I’m going to go with the people that get me. I’m going to go with my vision. I’m going to do what I want to do. It’s my life. I knew it was a good choice because it’s a freeing choice for me, know what I mean?

Well when it comes to the masculinity issue, you’ve spoken quite candidly about the double standard of straight men playing gay characters and winning all this praise for their “courage…”

Whereas gay men who can’t get cast as straight men.

Or in gay parts.

Or in gay parts, because everyone now wants the “brave” praise.

I’m curious. In your experience, where is that attitude rooted? I’ve spoken to so many actors, directors, writers, even studio executives that don’t see the problem of casting a gay man. So is it the agents? Managers? Lawyers?

I don’t know, and quite frankly I don’t give a f*ck. I don’t care where it comes from anymore. The only conversation I’m having is it’s over, we’re done with that. That’s the conversation I’m interested in having. I know what it used to be. To hear you say directors and writers and executives don’t have a problem with it, that’s encouraging. That’s good news to me. I just think the conversation is new. We’ve cracked it open, and now it’s up to us as artists that live in that world to make sure the conversation never quells.

Ok, last question. I talked to your friend Jerry Mitchell recently. He hinted at some possibilities of a Kinky Boots movie. He said he wanted to do it with you.

Would you be open to doing it?

Yes. Of course I want to do it.

Are there serious talks?

I haven’t been in any talks with anybody. So they have to call. I’ve finally gotten to the place where I’m famous enough that I can play my part. They won’t go and cast Bruno Mars or Will Smith.

Lord save us. Will Smith in drag?

I’m excited. I’m excited whenever it comes around to do it, and I think it would be an awesome musical movie.

The Season 2 finale of Pose airs on FX August 20.