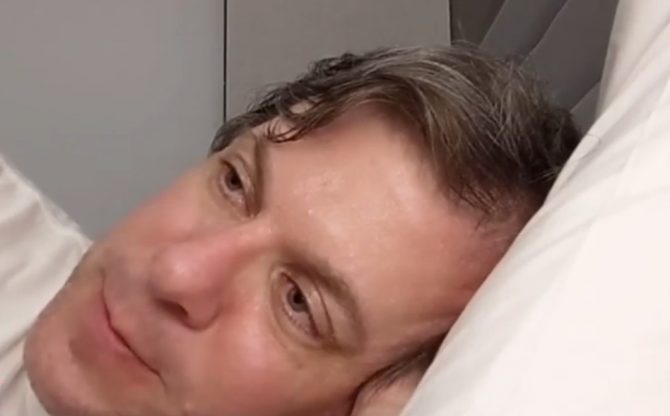 Rachel Maddow has someone she wants you to meet: Dan Renzi. The gay, Kansas-based nurse (and Queerty/GayCities contributor) left home for New York City to aid in the fight against the COVID-19 outbreak.

Maddow highlighted the story over the weekend, having stumbled on Renzi’s story in an Instagram post. There, the nurse shared his thoughts on working the nightshift

“Honestly, when I signed up to be a nurse, I had these visions of myself working for a cosmetic dermatologist or something,” Renzi says in the video. “If you told me that not too many years after I graduated that I’d be living in a hotel in New York while I was putting bodies in body bags because this mysterious fire was mowing down everybody’s grandparents…how do you process that?”

Renzi goes on to discuss calling relatives of the dead and toe-tagging bodies. He also says that as he helps prepare the bodies of the dead, he’s haunted by visions of his own parents, who have refused to observe stay-at-home guidelines.

Maddow then goes on to mention the “7 pm Clap” in New York, a citywide ovation directed at healthcare workers in a show of gratitude. She points out that Dan Renzi is exactly the kind of person the ‘7 pm Clap’ is aimed at.

“Part of the reason I wanted you to see these dispatches from him,” Maddow says, “in his new life as a nurse who has come from Kansas to work in New York City, is because I feel like we should all really see from the perspective of a health worker…we should see not just what those cheering episodes for health workers look like to all of us. I feel like we should all see what those feel like to somebody who those cheers are for.”

Maddow then cuts to some emotional footage of Renzi outside a hospital…which says more than anyone ever could.

here is the story that was on Rachel Maddow. Honestly I got so embarrassed watching her talk about me, I couldn't see the whole thing. But people say it is good. #coronavirus #nyc #nursesofinstagram