With each passing year, more and more corporations are jumping on the LGBTQ bandwagon with Pride-related merch.

Some call it a sign of growing acceptance, others label it straight-up money-grubbing rainbow capitalism.

We’re not sure if all the pent-up energy from quarantine has pushed folks over the edge or what, but some of the Pride 2021 offerings are just completely campy cray, but somewhat entertaining in spirit nevertheless.

Don’t believe us? Take a look for yourself.

Bim Bam Boo TP is already made from  sustainable bamboo, but now they’ve created a collection that lets you “poo with purpose.” (Their line, not ours!)

In support of all the trans folk who get harassed at gender-segregated bathrooms, they’ve designed a five-roll set that lets you  literally flush tired concepts like “bathroom laws” and “gender policing.” It also comes with BBB’s signature Butt Soap on a Rope, with a minty scent and all-natural ingredients.

Best of all, 100% of profits from “Flush the Binary” will be donated to the Trans Law Center, which fights for the right for people of all expression to live safely, authentically, and free from discrimination.

Our smart friend spent a half-hour explaining what NFTs is but it sort of leaked out of our brain five minutes later. Suffice to say you can’t nail them to your wall.

At any rate, Givenchy Parfums has teamed up with queer gallery owner Amar Singh and the Rewind Collective to create an NFT benefiting Le MAG Jeunes, an organization for French LGBTQ youth.

Titled “Pride,” it’s a limited series of animated portraits that symbolize “diversity, the assertion of identity and the fight for equal rights,” per a press release. “Innovative photos, which the collective reinterpreted digitally in the colors of the rainbow flag [express] Givenchy Parfums’ commitment to a more diverse, more inclusive, in short, more universal kind of beauty. “

Available on the VeVe app

Are you the non-committal sort? These cosmetic-quality skin-safe markers are perfect for making a statement at Pride that will be long gone by the time you go to work on Monday. The set comes with red, orange, yellow, green, blue, and purple brush-tip markers plus a bonus black-fine tip marker (not quite all the shades of the Progress Pride flag).

BIC didn’t respond to our email asking if it’s making a donation to an LGBTQ organization, but the markers DO come with an “inspiration pamphlet” with a variety of ideas on how to show support for the LGBTQ people.

And isn’t that better?

The Christmas queen clearly has her eye on Pride season next—she’st launched her very own rainbow merch line that includes tank tops, socks, hats, and hoodies. Our eyes were drawn to two items in particular—the $20 ‘Throw Shade” fan—perfect for enacting those “I don’t know her” moments—and the $60 (*cough*) Rainbow body tee, sure to give you the figure Mimi hasn’t seen since “Heartbreaker” topped the charts.

If you ever mixed Pop Rocks and Coke, you definitely need to check out this THC-infused candy from Sonder, a female and queer-founded premium cannabis brand. They’ve released a new flavor for Pride month: Cheers Queers, a strawberry-champagne flavor explosion that literally crackles and pops in your mouth before delivering a gentle body high “with a sparkly head high” finish.

With 10mg of THC per serving, they’re mellow enough to eat before going to a party, parade or even your PFLAG parents’ house.

$8, available (where legal) at AProperHigh.com

While we’re on the topic of reliving our childhoods, this colorful six-pack of creative clay takes us back to kindergarten, but with ingredients like organic wheat flour, sea salt, veggie oil, and cream of tartar it tastes WAY better than Play-Doh. (Um, we’ve been told).

During June, a whopping 10% of proceeds go to Rainbow Families, which supports, educates and connects LGBTQ+ families, parents and prospective parents. 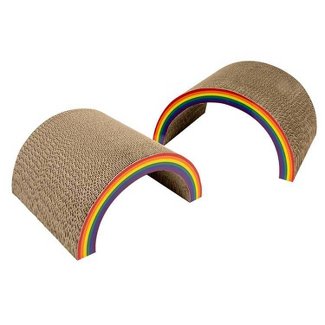 Just because you have no hope of getting Sir Isaac Meow-ton in a rainbow tutu doesn’t mean you can’t celebrate Pride this season. Watch your cat go HAM on the rainbow as they sharpen their claws on the resilient corrugated cardboard—and not your $3,600 Design Within Reach sectional.

OMG, do you guys know about the Bulletproof diet? It’s basically coffee with a big hunk of butter in it. Fad-diet guru Dave Asprey came up with it after drinking yak-butter tea in Tibet (as you do) and says drinking his Bulletproof coffee helped him boost his IQ over 20 points and lose a ton of weight. (It’s keto-friendly!)

Asprey’s not a scientist or nutritionist, but he claims his various biohacks—including getting stem-cell injections, taking 100 supplements a day, and using a hyperbaric oxygen chamber—will enable him to live to 180.

Well, huckster or not, 100% of sales from the Bulletproof MiiR PRIDE Tumbler benefit the Seattle LGBT Community Center. And you can put regular old Folgers in it.