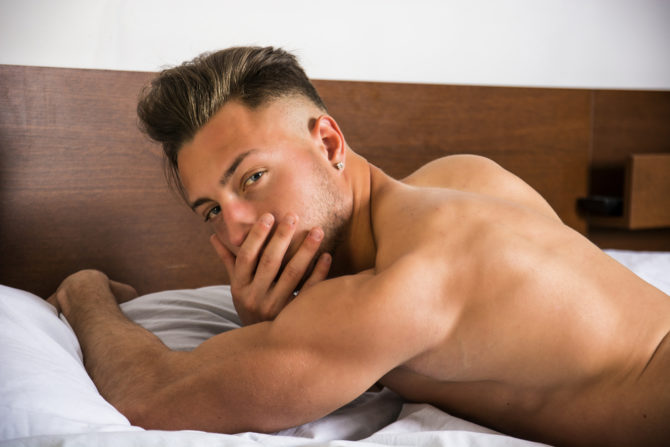 It’s only natural to lose your senses when a hot guy is around. After all, science tells us the blood flow to the brain gets diverted elsewhere… right? (Don’t fact-check that.) But some gay guys have surprised themselves with their lecherous behavior, and they’re sharing their stories on Reddit.

The confessionals kicked off after one user asked, “What is the skeeziest thing you have done, that you felt was out of character for yourself, to get a good look at a hot guy?”

The original poster coughed up his own story: “I once followed a really hot dude walking his dog because I knew he would have to bend over to pick up his dog’s business at some point. It worked.”

And here are some of the best responses, edited for clarity:

“I use a wheelchair, so sometimes if a guy is really, really cute, I’ll ask for help to get to the other side of a ramp even if it’s not that steep.”

“I work at a register and I saw a really hot guy walking up to the first register where my coworker was, and I said, ‘Hey, sorry she’s on break. Come to my register.’ As soon as he left, she laughed her brains out.”

“I was riding my bike past a construction site. The guy there was shirtless because it was 86° or more. I hit the curb and almost fell off the bike because I was staring at him.”

“I slowed my running pace to stay behind a guy because his butt was nice. I would have passed him otherwise.”

“I was in PortAventura once, a theme park in Spain. It was blistering hot that day, so I went on the log flume ride. A couple boats before me were three of the hottest shirtless Spanish dudes I’ve seen in a long time. When I left the ride and walked by the photo booth, I briefly considered buying their ride photo.”

“Played a strip game, although thankfully it wasn’t my idea. It was also all guys. Like, how no one thought it was a little gay is beyond me.”

“I was at work when this smoking hot cop walks in wearing a skin-tight uniform, muscles busting out and a nice, plump, round ass. I took a pic of his ass when no one was looking lol.”

“I worked in an emergency room before. There was this really cute and fit guy who had groin pain while playing basketball. I had to check for hernia, so I had to touch his balls and feel them with my fingers. Of course, I was trying to be as professional as possible and didn’t do anything questionable, but I loved getting to touch them.”

“In high school, I worked at a public pool and spent a lot of time making sure the locker rooms were clean and organized. Just doing my duty!”