For Williams, Collins & Eric Legendary represents a natural evolution of their careers. Williams began his career producing documentary films, having picked up an Academy Award for The Fog of War. He paired with Collins–both personally and professionally–shortly thereafter, producing the groundbreaking series Queer Eye for the Straight Guy. The pair also began working with fellow producer Rob Eric to produce the Queer Eye spinoff, Queer Eye for the Straight Girl, the sitcom Sordid Lives: The Series, the style series The Antonio Effect and eventually the Queer Eye reboot.

We snagged time with the very busy trio as they awaited the results of the Daytime Emmy Nominations to chat about bringing ballroom mainstream, the need to keep it authentic, and the obligation they feel to bring LGBTQ stories to a mass audience. Legendary debuts on HBO Max May 27.

So the three of you have been working together forever. At what point did you decide to tackle ballroom?

David Collins: That’s a great story. We all got invited to a ball in Weho at the gymnasium on a Saturday night. It was definitely a small ball, a bootstrap ball they had brought together. I don’t even remember who sponsored it…

Eric Ross: It was the Vanjie ball.

DC: It was, but it had a great sponsor…some lube they were handing out.

It ended up being for me personally, an unbelievably emotional night. I ended up in the elevator with two young African-American boys who were literally in tears, jumping up and down and hugging each other. I was like what’s going on guys? And they said “We just got asked to be in the House of Balenciaga!” They were screaming and yelling. And I had this moment of realization that these two young—and by the way, young meaning 16-17—they were in absolute joy that someone asked them to be part of this house. It was such a beautiful moment for me to witness and watch that. 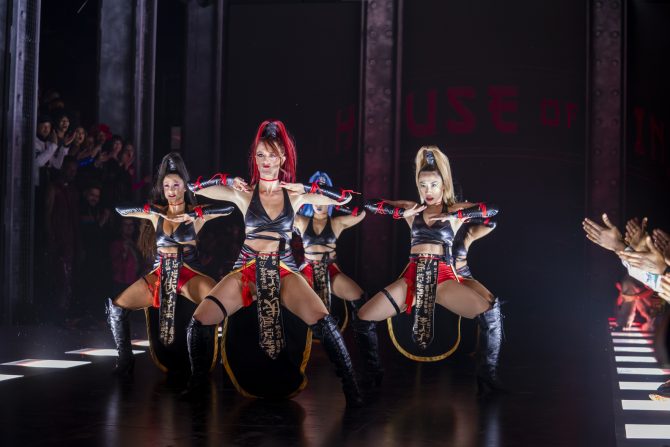 DC: So when I came back and met with these guys, it was like guys, this is so our world. It’s a marginalized community that hadn’t been celebrated. And if there’s anything that came out of the world of Queer Eye, it’s that transformation is a big part of our storytelling. It’s about people sharing information. That’s all transformation is—us sharing together, and hopefully, we’re laughing and crying along the way. So that’s what blew ballroom open for us: a Saturday night in West Hollywood.

Michael Williams: I, however…

MW: I’m an old queen. I had gone to my first ball in 1989, way back when I was a kid. Then I moved to New York City, and I was a DJ. So that world, particularly in the 90s, took ballroom into the club and created these pockets. If you went to any night at Twilo or Palladium, the voguing crowd was the crowd to watch. That was the crowd that came in with fashion. That was the crowd that was influencing the music. Then Paris is Burning came out, and that world was happening there. So when we went to the ball it brought back all of that. So we wondered if we could take the excitement that we saw in ballroom culture and make it vibrate on the big screen, and not have it feel like a regular show. So we wanted all of that and to tell the story of four decades of ballroom culture, and how it’s influenced pop culture.

A lofty goal. I must confess, I was nervous when I heard about the show. Queer people—particularly trans people and queer people of color—are very protective of the ballroom scene, both because its a safe space, and because it’s been exploited in the past. When you started reaching out to ballroom houses, how much reassurance did you need give them?

DC: Yeah, because we started with the houses. We didn’t start by hiring the host or the judges on the show. We started in the ballroom community two years prior to selling the show. They had to be authentic houses; they couldn’t be created houses. So we started there. And as you know, ballroom is an inclusive world. It’s a refuge for people who don’t feel like they’re included in society. Remember, we are three queer men…

DC: With very different backgrounds. We all come from different experiences. And in one way or another, ballroom has touched all of our lives, whether it be through culture, through being part of the scene, all of that. Jack Mizrahi is a good friend of ours, and he obviously has his finger on the pulse of ballroom. And you bring in Deshaun Wesley, Leiomy Maldonato, Megan Thee Stallion, Law Roach, who credits his whole career to ballroom.

MW: Also, getting to those people, we were able, because of the success of Queer Eye, made it easy for these people to trust us. So that made it really easy for them to latch on.

DC: And to take it a step further, while indeed we are three gay men on this call, we are three gay white men. We realized we needed to really to ask to be embraced in their world. We invited all of the house parents to LA to our offices for lunch catered by LaBrea Bakery.

DC: So we brought all the goodies out, and there are trays of food everywhere, and they were just looking at us like what are you up to? To Michael’s point, we just kind of laid it all out and said we wanted to figure out how to celebrate them, how to celebrate ballroom, how to bring their world to the masses. So we said, “How do we do this properly? How do we tell your story?” And it’s interesting, a lot of them were like we’re tired of sad documentaries about us.

DC: We don’t want to tell a sad story. We want to show why we love ballroom. So you mention being nervous? Rightly so, and we were too. We may be the Queer Eye guys, but this is a whole other world. We wanted to make sure that we did it right, so we let them guide the way.

Rob Eric: It’s honestly very similar. Every person that is part of the LGBTQ community has their story. Every one of us has a story we bring to the table. It’s important to celebrate every one of those stories, not just one aspect of it.

RE: I always say one of our proudest moments was getting everybody into the room as we launched the show. Everyone had arrived to set, and we were like look around the room. This is the most omni-cultural show that has ever been on television. We are representing every single community within the LGBTQIA experience, and we’re doing it in a way that is celebrating us, celebrating ballroom, everything that has been done over four decades in this world that has be stolen or used. Fashion in the 90s—they were just going to balls, replicating it, and putting it on runways. Now they’re telling their own stories. That was incredibly important.

That’s so wonderful. One thing that really surprised me about the series was how it didn’t really feel like traditional reality TV. It felt more like a sports series. Maybe that’s because the show doesn’t focus on drama or make anyone out to be a villain. Was that a conscious choice?

DC: If you’re talking about shade in general, I think as the season arcs and the competition gets stiffer, the shade grows. But ultimately, what ballroom is about, is hugging your brother or sister on the stage after they’ve just cleared the floor.

DC: That’s why ballroom works. In the first few episodes, Dashaun’s “catchphrase” is “We’re not going to be shady. We’re going to be fierce.” And it’s the greatest line of all time. Shade is just to get everyone riled up. The real result is “Girl, you just killed it.”

RE: Everyone in that world can be shady with each other, but don’t f*ck with them. They will unite against you. And you see that a lot in the drag world as well. Drag queens go after one another, but at the end of the day, it takes an amazing amount of courage to do what they do. And ballroom is like that too. Ballroom is about creating families.

That’s terrific. Along those same lines, in all three of your careers, certainly in your collaborations together, you’ve focused on different elements of the queer community, different stories. Do you feel like you have a moral responsibility to help the visibility of the community, to feature other LGBTQ people in your work?

Is that a ridiculous question? 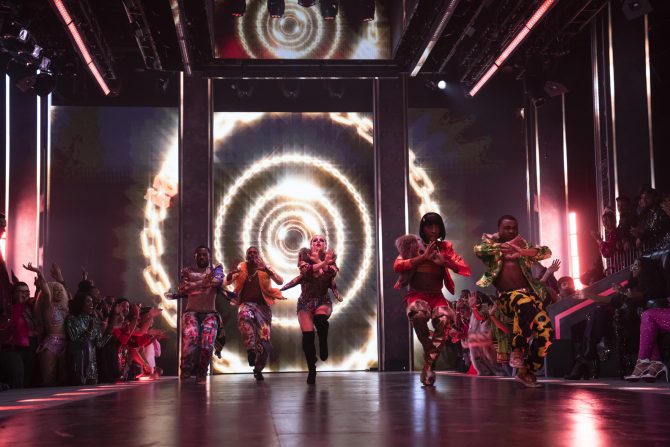 DC: Michael should speak to it for us. He and I have twin 11-year-old girls together, Ellen and Olive. We brought them into this world with not only gay dads, but being the Queer Eye guys. We realized, personally, the absolute importance of what our job was, not only as Daddy and Papa, but to help them see the history and breadth of this world. We want to raise our daughters in a new way to give them an opportunity to not be confused as teenagers through our work. We’re driven to make sure that the truth and insight to all things LGBTQ are seen.

MW: Yeah. We got an award last year from the Equality Council, and various speakers were talking about how they were shunned by family, they were kicked out, they lost their jobs, etc. And I go up there to accept for Queer Eye, and I’m like…I must have lived in a bubble. I’ve never been harassed. I’ve never been called a f*g. I’ve never been called a name. My family accepted me. I’ve worked with Teamsters in Boston who accepted me. I never experienced that. I want to continue to make sure gay people have the life and luck that I had growing up—that it wasn’t any big deal.

MW: Our daughters go to school, and there are lots of gay families there. In their class alone, there are three families. It means nothing to them at that age. That’s what we love seeing: kids growing up like you have two dads? Two moms? Four dads? That’s cool. I think by continuing—we’re not all gay all the time shows—but when something good comes along, and this one of a world that we weren’t part of, it’s great to experience that.

As David said, when the houses started coming to the offices, I needed a cold towel for my head. These hot guys were coming in.

MW: And it was really special. When we shot the sizzle reel, the energy was amazing.

DC: And our partners at HBO got it right away, the second we brought it up. They instantaneously got it. This story has to be told.

Legendary debuts on HBO Max May 27.