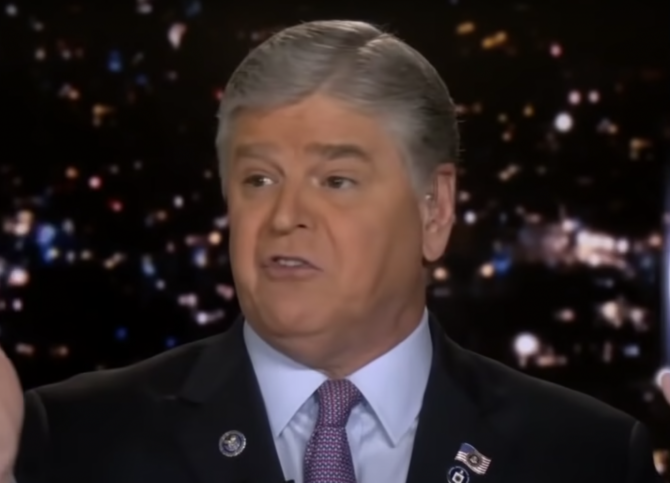 Everyone’s talking about the super cryptic texts Sean Hannity sent to White House officials in the days leading up to January 6, but he’d much rather discuss the rising cost of ground beef in America.

The Fox News homophobe was just sent a letter from the House committee investigating the insurrection and they want to know about the “dozens of text messages you sent to and received from former White House Chief of Staff Mark Meadows and others related to the 2020 election and President Trump’s efforts to contest the outcome of the vote.”

The Committee is seeking information from Sean Hannity.

Chair @BennieGThompson and Vice Chair @RepLizCheney request Hannity answer questions about matters including communications between Hannity and the former President, Mark Meadows, and others in the days surrounding Jan 6th. pic.twitter.com/wXtOGSsneg

According to the panel, days before the attack on the U.S. Capitol, Hannity sent an ominous text to Meadows saying that he was “very worried about the next 48 hours.”

Other texts written by Hannity imply that he knew the White House Counsel’s office was concerned about the legality of Trump’s plans to overturn the 2020 election results and remain in office.

We can’t lose the entire WH counsels [sic] office. I do NOT see January 6 happening the way he is being told. After the 6 th. [sic] He should announce will lead the nationwide effort to reform voting integrity. Go to Fl and watch Joe mess up daily. Stay engaged. When he speaks people will listen.

And in another text, he wrote: “Pence pressure. WH counsel will leave.”

But what the committee is especially curious about are the private, nonclassified conversations Hannity had with ex-President Trump the night before he ordered his MAGA militia to storm the U.S. Capitol.

It also appears from other text messages that you may have had a conversation directly with President Trump on the evening of January 5th (and perhaps at other times) regarding his planning for January 6th. Each of these non-privileged communications is directly relevant to our investigation.

Hannity hasn’t publicly commented on the letter. Instead, he’s been raging on Twitter about how Joe Biden is now responsible for the rising cost of hamburgers and how the problem is only going to get worse, according to South Dakota Governor Kristi Noem.

WHERE’S THE BEEF? The cost of meat is skyrocketing, and President Biden wants to use government regulations and spending to lower prices. That will only make things worse! @GovKristiNoem will respond TONIGHT on “Hannity.”

Here’s how people are responding to Sean’s meat meltdown…

Everyone’s talking about you, your text and the 1/6 committee, but your tweeting about meat prices?

Have you spoken to the 1/6 Committee lately? That may be more important.

Hey buddy, someone needs to speak to you about your text messages.

Love the defection. Those texts though! Hoo boy

How desperate is Insurrectionist Sean to distract from those emails that got released today by the Committee showing that he knew in advance exactly what was going to happen on 1/6?