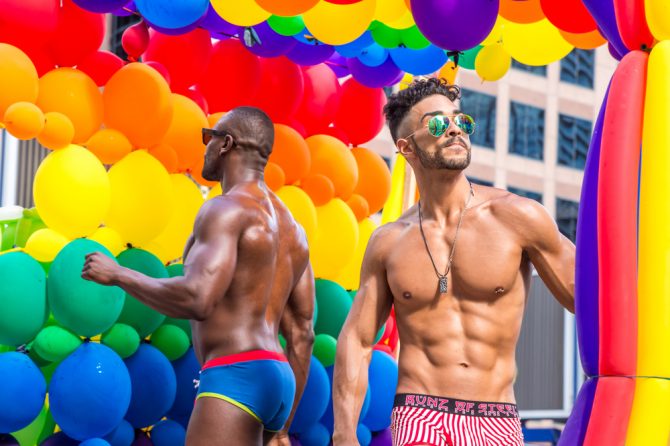 In a society that has historically valued white above all other human colors, we the black people need our own advocates and forums of recognition, whether they be in the form of individuals, organizations, award ceremonies, TV, or movies. As a black man, I get it. That doesn’t mean I have to always like it.

The “black” make-up movement I love least right now is one currently playing out from sea to shining sea (in Atlanta, Los Angeles, and Philadelphia, among other U.S. cities) and in London: Black Gay Pride. Again, as a black man, I get it. That doesn’t mean I have to like it.

Black Gay Pride is a positive celebration, but it’s also a sobering reminder that, in many ways, the LGBTQ community is no more accepting than the straight community. It’s a world where activists preach diversity and acceptance, but one in which white, masculine, and young are seen as superior to any of the alternatives.

Black Gay Pride serves as a reality check that I might never be just a gay man or just a black man. For now and for the foreseeable future, I’ll always be a “gay black man.” I’ll have to wear at least one “X” everywhere, whether I am in an exclusively black crowd or an exclusively gay one, signifying that I don’t completely belong to either.

The homophobia that runs rampant in black culture has been well-documented and dissected, on social media, in rap music, in stand-up comedy routines, and in numerous think pieces. But we rarely talk about the insidious racism in gay culture that can render anyone who doesn’t fit the white ideal unwanted and invisible. Yes, there’s white privilege in the LGBTQ community, too.

Writer Kevin Maxwell, who is black and gay, recently wrote about why he wouldn’t be attending this year’s Pride in London on July 6 in an op-ed for the UK’s Independent. His thoughts echoed the way I feel about all the Gay Prides I’ve skipped in cities where I’ve lived, from New York City to Buenos Aires to Sydney.

“Pride in London claims this year will be its ‘most diverse’ parade yet, though historically, Prides have excluded diverse voices from within the LGBT+ community — the very people the movement was created to uplift. This is one reason that UK Black Pride throws its own celebration the day after, specifically for people of colour.”

So in the end, if you’re black and gay like me and living in the right city, you might get your own special parade, but what does it do about the larger problem? Are Black Gay Prides bridging the chasm or widening it? Do they mean we should abandon traditional Gay Pride rather than try to fix it?

God knows a few significant repairs are needed. I’ve always side-eyed Gay Pride because it feels like someone else’s party. I view it with the same degree of suspicion and near-dread that I do the Fourth of July, a holiday that celebrates a manifesto of freedom from a time when my ancestors were slaves. Independence Day is more about white people than it is about me.

The hypocrisy of the gay community may not be as violent as America’s racist past, but it can be nonetheless haunting. For most of my life, I’ve felt like something of an interloper among what are supposed to be my own people. Gay life is dominated by white men and white voices, and even in the so-called safe spaces (bars, clubs, dating and hook-up apps), for too many, my greatest value is in the presumed size of my penis.

I never feel blacker than I do when I’m surrounded by gay men, in both virtual and actual reality. That’s not because I’m automatically more conscious of my race. It’s because others keep reminding me of it — whether it’s through an offhand “BBC” comment on Grindr, a question or compliment that revolves around black men and assumes conformity over individuality, or the N word hurled by a rejected suitor.

Perhaps the sexual element brings out our basest impulses. I’m on the receiving end of some flagrant display of gay racism and racial objectification on most days that end in Y, usually online but sometimes in real life, too. Straight people can be horribly racist, but I can’t remember the last time one was overtly racist to me, and unlike gay men, they rarely bring up my race to my face.

Black Gay Pride is a jolting newsflash: It gets better for some, but not for all. It underscores the division in our community, in all minority communities. We spend so much time criticizing straight white men for taking their privilege for granted while using it against us. Then we turn right around and create categories within our own community that put those who don’t fit the idealized standards (white, masculine, young, whatever) into boxes labeled “Other.”

The entire gay community needs to talk more about diversity and inclusion within its own ranks and not just outside of them. We all must pay closer attention to the specific hurdles that many gay people of color face, including poverty, racially motivated violence and police brutality, and racially and religiously coded homophobia.

I don’t groan over upper-case Black Gay Pride because I have anything against lower-case black gay pride. It hurts because having it means we still need it, and in 2019, Gay Pride, despite the rainbow flag that represents it, should be color blind.

I’ll support Black Gay Pride through clenched teeth as long as it’s necessary. But I’m waiting for the day we’ll no longer need it, when gay pride and black gay pride finally merge and become the same thing.