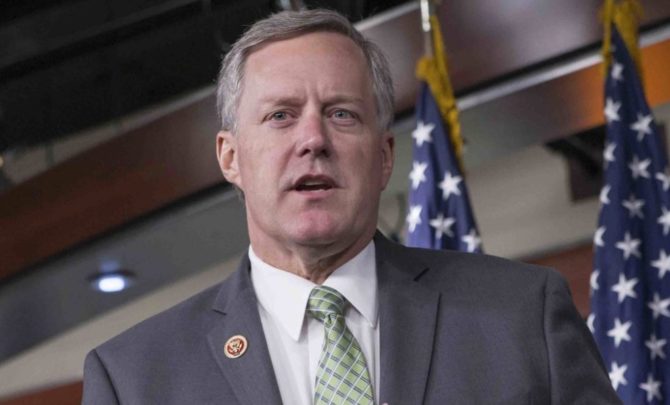 While President Trump has said he’s in no rush to fill what is arguably the second-most influential position in the White House, chief of staff, he has confirmed he’s looking closely at a list of potential candidates.

After the current chief of staff, John Kelly, announced his plans to depart the administration and the top choice to replace him, chief of staff to Vice President Mike Pence, Nick Ayers, turned down the job, Trump reportedly had no plan B.

And as potential replacements continue to signal they aren’t interested in becoming Trump’s right-hand-man — not the most appealing gig in Washington at the moment — one person on the shortlist is signing a different tune.

Rep. Mark Meadows of North Carolina is the leader of the rightwing House Freedom Caucus and was a key player in Trump’s transgender military ban. He’s also reportedly being considered for the job.

“Serving as chief of staff would be an incredible honor,” he told Politico. “The President has a long list of qualified candidates and I know he’ll make the best selection for his administration and for the country.”

Axios reports Trump has been asking advisors if they think Meadows would make a good chief of staff.

Aside from his work on the trans military ban, Meadows’ Freedom Caucus worked to rescind Obama-era trans student protections, was a vocal opponent of same-sex marriage and fought against nondiscrimination protections in the Affordable Care Act.

Recently, Meadows was part of a contingent of Republicans in Congress to send a letter to the president urging him not to sign the new trade deal with Mexico and Canada.

Their issue with the major deal stemmed from its inclusion of LGBTQ worker protections, which wound up being nullified in a footnote.

Whether Meadows gets the job or not, this nightmare of a revolving door at the White House is far from over.