The US Postal Service has unveiled a whole series of stamps commemorating Bugs Bunny. The series marks the 80th anniversary of the first Bugs Bunny cartoon.

The organization revealed a different image from the series each day in the run-up to the set going on sale on July 27th.

By some distance, the stamp that proved the most popular on Twitter, was an image of Bugs Bunny in dressed as a woman, playing ‘Brunhilde’ from the Richard Wagner opera, Siegfried. The image comes from the 1957 animated short “What’s Opera, Doc?”. The tweet revealing the design has had over 7k likes, while most of the others had less than a thousand likes. Many expressed a wish to just buy sheets of this stamp alone.

I wish I could buy a sheet of 20 for just this stamp! iconic queen

Can you please make and sell just a sheet of these? Or a print of this? Please and thank you!!!

One person even wondered if the stamp was ‘legal’, prompting a blunt response from the official Looney Tunes account: “of course it is duh”

of course it is duh

“What’s Opera, Doc?” wasn’t the only time Bugs Bunny donned female attire, though. There’s another stamp depicting him dressed as a mermaid, from the 1944 film “Hare Ribbin’, which also prompted plenty of likes and comments on social media. In fact, fans of the cartoon can point to many times when Bugs cross-dressed or pretended to be female, as the video below illustrates.

RuPaul even said in an interview with the Hollywood Reporter back in 2016 that the iconic cartoon character was his first introduction to drag.

“Bugs Bunny was my first introduction to drag! As a kid, I always dressed in everything. I would use all the tools available as a human to express myself. No sexual connotation to it. It was just stuff.”

More recently, movie director Lilly Wachowski talked in the Netflix documentary, Disclosure – which explored trans representation in Hollywood – about the impact of Bug Bunny’s gender non-conformity on her as a child.

It’s believed to be the first time the postal service has depicted any form of ‘drag’ on a stamp. Although USPS has previously commemorated LGBTQ icons, such as Harvey Milk and writer James Baldwin, it has not featured a real-life drag performer. Given the popularity of the new Bugs Bunny stamps, some feel this should change.

San Diego-based Nicole Murray Ramirez leads the International Imperial Court System, a philanthropic organization within the drag community. He chaired the national campaign to see Harvey Milk feature on a stamp and has been campaigning for a stamp honoring civil rights icon Bayard Rustin. He told the Bay Area Reporter, “While this is a ‘cute’ move by the National Stamp Commission and US Postal Dept. we look forward to stamps in honor of true drag queens/TRANS heroes like Jose Julio Sarria, Sylvia Rivera, and Marsha P. Johnson.”

Asked by Bay Area Reporter about the drag Bugs Bunny stamps being a first for the US Postal Service, a spokesperson offered an evasive answer: “Bugs has always donned a variety of clever costumes and disguises including dresses and wigs to outwit his opponents and entertain us all. Bugs summons up any talent — and any costume — that will help him thwart his relentless foes.

The USPS Bugs Bunny Forever stamps cost $11 for the commemorative sheet of 20 stamps. 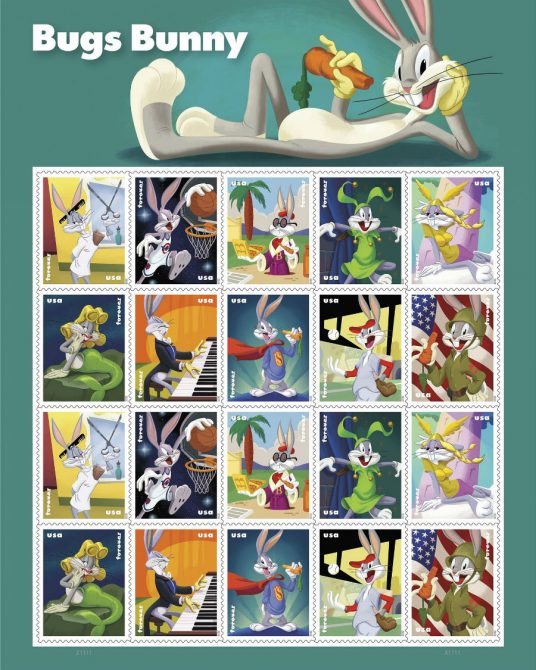