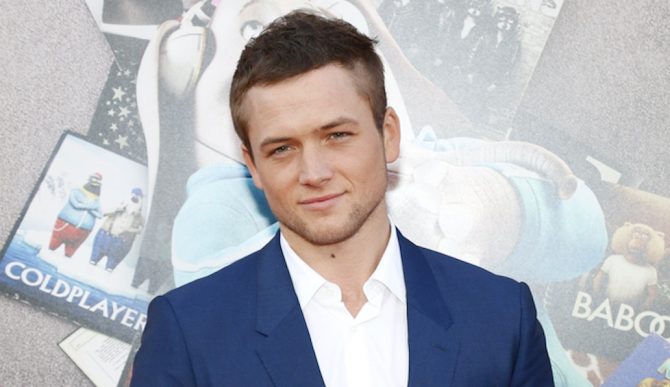 Taron Egerton sat down for a chat with GQ UK this month to promote his star turn in the upcoming Elton John biopic Rocketman and revealed he loves to hang out at gay clubs. The stars, they’re just like us.

He also expressed discomfort around feeling pressured to be hypermasculine on sets like Kingsman, being “the ‘guy’, the ‘bro’, the ‘stunt guy.”

“I always felt more at home in a gay club than at a football match, far more at home,” he said. Sadly he failed to mention which gay clubs he likes to frequent. Could Taron be a circuit queen after all?

“I’m not someone who really subscribes to this binary view of male and female archetypes or ways of behaving. … Our concept of what a straight man or gay man looks like or is expected to behave in 20 years will be nothing like it is now.”

The actor also touched upon the recent non-troversey around a story that studio execs at Paramount demanded cuts to the film’s gay sex scenes. Those reports were quickly dismissed as false.

“Well, the stuff we shot was pretty explicit. I mean, that’s why I made the film,” Egerton told GQ UK.

“And for me, especially as a heterosexual actor, not to push the envelope as far as I can or try to make it a wholehearted celebration of being a gay man would be wrong. … What’s an extra $25 million at the box office? What are you willing to do for that? Sacrifice sleeping at night because you watered the whole thing down?”

The feature also includes an interview with Elton John’s husband and Rocketman producer David Furnish, who spoke candidly about his first impressions of John and why Egerton ended up nabbing the highly competitive role:

“When I first met Elton I was quite taken by his masculinity. He’s quite a blokey gay man. You can take him and put him in these costumes, pile up the feathers or the crazy stuff, and it all just kind of lands on him in a very masculine way. Taron has real gravitas and it’s very similar. He has the incredible -sensitivity and gentleness that Elton has, but he also has this manliness too. It’s a very complex quality.”

Rocketman arrives in theaters May 31.