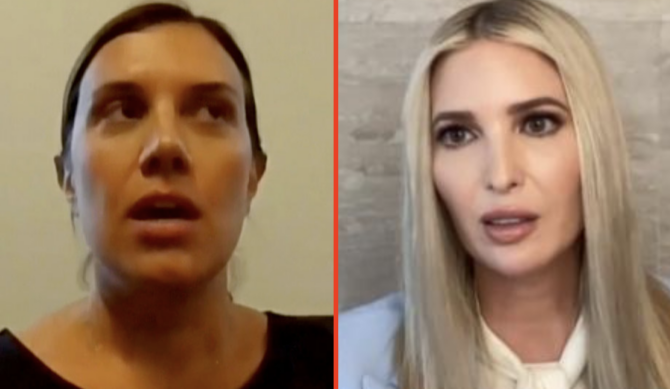 Did you hear that? It was the sound of Ivanka Trump frantically Googling the penalty for perjury under federal law. (Answer: Up to five years plus fines.)

During yesterday’s January 6 hearing, Ivanka’s former chief of staff, Julie Radford, basically threw her under the bus by directly contradicting sworn testimony she gave to the committee back in April.

Radford served as Ivanka’s chief of staff during her entire time pretending to be a government employee in the White House. The two were virtually inseparable from 2017 until the day Ivanka was seen weeping on that tarmac as her dad gave his final speech as U.S. President.

During yesterday’s hearing, the committee played video of Radford explaining why Ivanka accompanied Donald Trump to the Ellipse for his pre-insurrection speech on January 6, 2021.

To set things up, video was played of Ivanka testifying that she didn’t attend the “Stop the Steal” rally in an effort to calm her dad down after a heated exchange he had with ex-vice president Mike Pence.

“It has been reported that you ultimately decided to attend the rally because you hoped that you would calm the president and keep [him] on an even keel,” one of the investigators asked Ivanka in the video. “Is that accurate?”

To which the former first daughter replied under oath, “No. I don’t know who said that or where that came from.”

Related: It sure looks like Ivanka lied in her testimony to the January 6 committee

The committee then showed video testimony of Radford, who literally said the exact opposite.

“What did she share with you about why it was concerning that her father was upset or agitated after that call with Vice President Pence in relation to the Ellipse rally? Why did that matter? Why did he have to be calmed down?” the investigator asked.

To which Radford replied by saying that Ivanka told her that her father called Pence “an expletive word.”

“I think that bothered her,” Radford explained, “and I think she could tell based on the conversation and what was going in the office that he was angry and upset and people were providing this information and she felt like she might be able to help calm the situation down, at least before he went on to stage.”

lol Ivanka and Ivanka’s chief of staff told two different stories during their depositions about Trump’s frazzled state of mind on January 6 pic.twitter.com/U64Yz4zm6v

This isn’t the first time Ivanka has been caught talking out of both sides of her mouth and potentially committing perjury in the process.

During the first televised January 6 hearing last month, the committee played footage of her saying she “accepted” then-Attorney General Bill Barr’s statement on December 1, 2020 when he said the DOJ didn’t find any evidence of voter fraud in the 2020 election, despite her father’s repeated claims to the contrary.

“I respect Attorney General Barr so I accepted what he was saying,” Ivanka said.

She also told the committee that she believed her father lost the 2020 presidential election “likely before” the formal Electoral College vote on December 14, 2020.

But she told documentary filmmaker Alex Holder a completely different thing on December 10, 2020.

“I think that, as the president has said, every single vote needs to be counted and needs to be heard, and he campaigned for the voiceless,” she said, nine days after Barr made the assessment that supposedly led her to “accept” the election results.

“And I think a lot of Americans feel very, very disenfranchised right now, and really, question the sanctity of our elections, and that’s not right, it’s not acceptable.”

Ivanka went on to tell Holder that her dad would “continue to fight until every legal remedy is exhausted and that’s what he should do.”

So Ivanka Trump lied under oath in her testimony to the Jan 6th Committee.

So, will there be any legal penalty whatsoever for Ivanka Trump now that it’s clear she perjured herself in her deposition?

Why did Ivanka Trump need a chief of staff?

The Jan. 6 Committee played video of Ivanka Trump's testimony & then video of Ivanka's chief of staff contradicting that testimony. LOCK HER UP! pic.twitter.com/36dArlu1BD

The video of Nepotism Barbie aka Ivanka Trump giving testimony only to have video of her chief of staff contracting that testimony screams perjury. If these people don’t find themselves behind bars, then “democracy” as well call it, really is dead. #LockThemAllUp

Ivanka Trump lied under oath during her January 6th Testimony. Perjury is a federal crime. Ivanka Trump belongs in prison for committing this crime that any ordinary citizen would go to jail for if they did the same. Ivanka Trump is a MAGA criminal. Just like her Nazi father.

It's going to be really awkward when Ivanka Trump walks into the prison cafeteria and Kayleigh McEnany is wearing the same outfit.

Jared Kushner and Ivanka Trump should be forced to camp in a 2 person tent under a freeway for the rest of their lives.

According to New York Times, Donald Trump is deeply annoyed by his once-favorite daughter, reportedly telling advisers after hearing her testimony, “Can you believe that? She shouldn’t have said anything!”

Last month, he blasted her on Truth Social, writing: “Ivanka Trump was not involved in looking at, or studying, Election results. She had long since checked out and was, in my opinion, only trying to be respectful to Bill Barr and his position as Attorney General (he sucked!).”

Related: The trailer for the new Trump docuseries looks like an absolute horror show