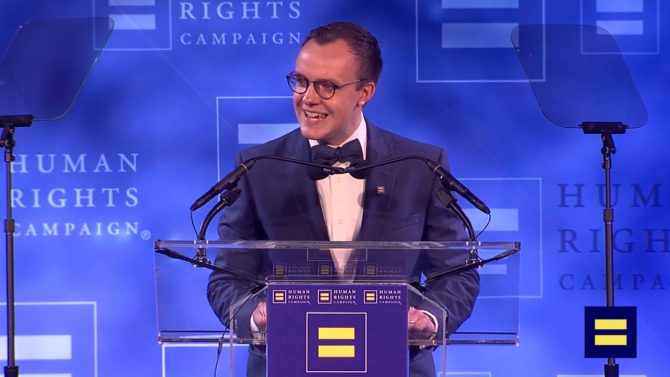 Chasten Buttigieg, the bestselling author and husband of U.S. Secretary of Transportation Pete Buttigieg, showed everyone how to gracefully and grandfully clap back at a homophobic bully earlier this year.

On the day conservative blowhard and lifelong homophobe Rush Limbaugh died, the 31-year-old simply tweeted a picture of himself kissing his husband. Though it was submitted with no comment, the photo spoke volumes.

Limbaugh spent much of the 2020 presidential primary season trashing the Buttigiegs, obsessing over their relationship, and mocking them for kissing in public. Chasten re-sharing the image on the day of Limbaugh’s passing served as a reminder that, in the end, love always prevails.

But Chasten’s advocacy for LGBTQ issues goes far beyond a simple public kiss–and an epic clapback.

During his husband’s historic presidential primary campaign, which included winning the Iowa primary, he served as campaign spokesperson and advisor, and was often called Pete’s “secret weapon” when it came to fundraising. In the process, he emerged as a fierce and effective advocate for equality.

From using his huge social media platform to urge the Senate to pass the Equality Act to touring a local LGBTQ center while campaigning for his husband to speaking out against hate and bullying, he gives us pride in the ways he continuously brings attention to the discrimination we face while also serving as a positive example of queer leadership and love.

“I don’t think we can be comfortable where we’re at now,” he told Marie Claire in 2019. “Equality wasn’t won when we were granted marriage equality, it was just the beginning. We can’t be complacent with where we’re at right now. We’re just getting started.”