Raising My Rainbow is written by the mother of a slightly effeminate, possibly gay, totally fabulous son. She’s chronicling their journey right here on Queerty. Read up on RMR‘s cast of characters.

It’s still summer break here and I signed C.J. up for a special morning camp at the gym where he takes gymnastics. By the way, he has officially been promoted from a Tumblebee to a Kinderroo, so you might want to get your tickets now for the 2024 Summer Olympics. Consider yourself warned.

We arrived bright and early: C.J., C.J.’s Brother, Uncle Uncle’s boyfriend and me. We signed in and I asked the sweet little innocent camp counselor what was on the agenda for the day.

“Okay. Well. We have free play from 9 to 9:15 a.m., stretching from 9:15 to 9:30 a.m., then we put the kids in groups based on their age and gender,” she said, seemingly thrilled to be able to answer my questions so thoroughly. 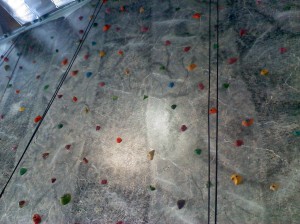 Uncle Uncle’s boyfriend looked at me and I was glad that he got the chance to see what I to deal with on a constant basis.

“What do the different gender groups do?” I asked.

“Well, the girls do gymnastics, cheerleading and dance and the boys do soccer, rock climbing and go on the big trampolines.” Again, so proud to be capable at her job.

“My son might want to go with the girls,” I said.

She hadn’t been instructed what to do in this situation. Deer in headlights. I scooped up C.J.

“C.J., do you want to do gymnastics, cheerleading and dance or soccer, rock climbing and trampolines?,” I asked.

“It looks like he’ll go with that group, then,” I told the camp counselor, refusing to call it the boy group.

“Alrighty,” she said, relieved. You and me both, sister.

My son wanted to go in the boy group. (Actually he really just wanted to bounce on the trampolines, but I’ll take it.) I walked out of the gym feeling a little different. My son chose to go with the boys and do “boy” things. I’d have to get used to the idea.

“Why do they have to break them up by gender? I bet there are five girls in there who want to climb that rock wall. Hell, I wanted to climb the rock wall!” Uncle Uncle’s boyfriend said as we walked to the car.

“As a child, I would have much rather climbed the rock wall and bounced on the trampoline than do a cheer and dance routine,” I said, wishing that they would break the kids into groups not by gender, but by activity preference. But what did I care that day—my boy wanted to be in the boy group.

And the next day he wanted to be a cheerleader.