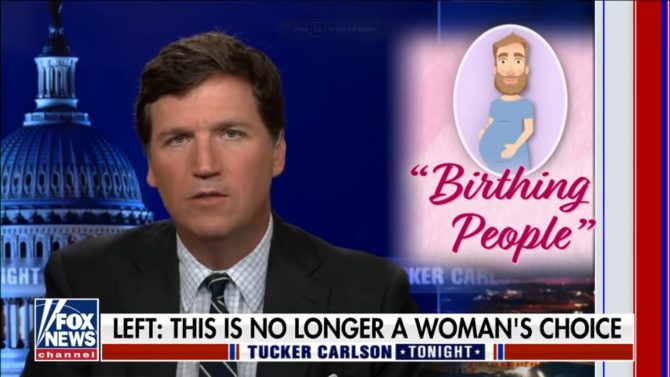 Fox News personality Tucker Carlson launched into a hateful rant during his show’s September 3 broadcast. In it, he used transgender rights to attack the Biden Administration and defended a new anti-abortion law in Texas.

Carlson began by attacking White House Press Secretary Jen Psaki over an exchange with a reporter earlier in the week. The reporter questioned Biden’s support for abortion rights, as Biden is a practicing Catholic. Psaki fired back that Biden supports a woman’s right to choose despite his faith.

“I know you’ve never faced those choices, nor have you ever been pregnant,” Psaki told the reporter.

Related: Tucker Carlson’s attempt to ‘own a lib’ ends in embarrassment

For the record, a pregnant man does not appear on the cover of People this week. The magazine does feature an image of Lil Nas X off from his forthcoming album art which depicts him as pregnant. For the record, Lil Nas X is not pregnant.

“Now what does that mean?” Carlson continued. “It means that abortion is now a men’s issue. Men are child bearers. So men, dudes, have an equal right to choose to terminate their pregnancies, and they have a right to weigh in on the policy itself.”

Tucker Carlson has a long history of attacking the LGBTQ community, with a specific disgust for transgender people. Last month, he labeled transgender people “satanic” in conversation with right-wing columnist Jason Whitlock. In May, he attacked the Biden Administration for supporting the rights of transgender children to medical treatment. In April, Carlson claimed transgender people threaten the future of humanity.