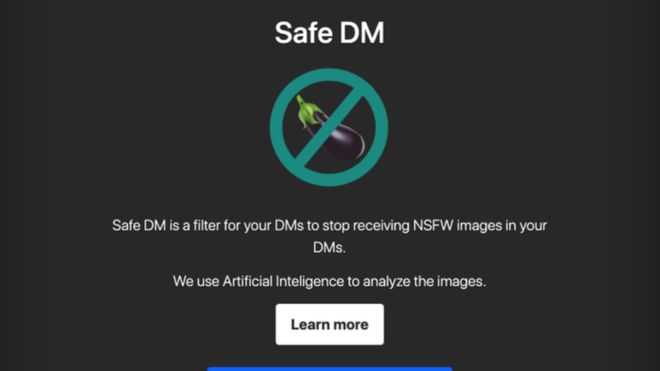 The days of sending and receiving unsolicited D pics on Twitter may soon be coming to an end. A new filter has just been launched to prevent unwanted nudes from sliding into people’s DMs.

Safe DM is a plugin that automatically blocks and deletes pictures of penises sent via direct message. According to developers, the filter is 99% effective in detecting D pics.

Kelsey Bressler says she came up with the idea after a dude sent her his unsolicited nudes, which she calls the “virtual equivalent of flashing someone in the street.”

“You’re not giving them a chance to consent,” she told media last year when she first started working on Safe DM. “You are forcing the image on them, and that is never OK.”

Related: When Did Unsolicited Nudes Become The Appropriate Way To Say Hello?

Safe DM scans users’ messages for pictures of penises. If one is detected, it sends a reply to both parties alerting them that the message has been deleted.

Buzzfeed tested the plugin and concluded that the software is extremely accurate when it comes filtering pictures of penises; however, it noted that there’s a lag time of several minutes.

To develop the software, Bressler asked guys to send their nudes to @showyodiq.

“I am testing a filter that is under development which will automatically detect dick pics in DMs and handle them on behalf of the user,” she tweeted last September.

She received over 4,000 pictures in response.

Developers maintain that “not all d*ck pics are bad,” just unsolicited ones.

Not all dick pics are bad!

Safe DM will have a user dashboard with an on/off button so that the filter can be disabled at any time . Just remember to turn it back on when you're done ?

Safe DM became available to Twitter users on Friday and can be installed by adding the plugin to your account then granting it access to your DMs. Bressler says she hopes to expand the plugin to other social media platforms soon.

While the plugin is being praised by many, at least one Twitter user will not be utilizing the new software.

So twitsers has a new filter to delete 'unsolicited' dick pics from DM's. Safe to say I will never use that filter LOL. All pics welcome to my DM 🙂

Related: Unsolicited nudes are now against the law in Texas