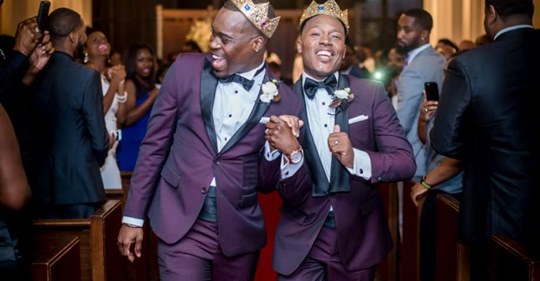 Adrian Homer and Harrison Guy first met in 2007, when they both joined the Delta Phi Upsilon, a fraternity for queer men of color, at Prairie View A&M University near Houston, Texas.

But neither of the guys expected at the time that their fraternity bond would lead to marriage, let alone a romantic partnership.

What started as some flirty text messaging quickly evolved into something more. And in July 2017, 10 years after meeting, the guys finally said “I do!”

Their wedding had over 250 guests and included a total of 19 groomsmen and groomsmaids plus an extravagant “coronation of love” that was covered by NBC News, offering viewers nationwide a shining example of Black gay love and excellence.