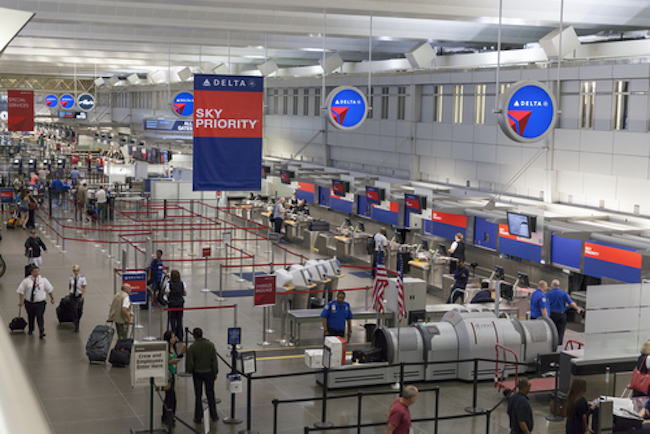 A disabled gay man claims United Airlines made him relinquish his mobility device before boarding his flight, and says the experience totally destroyed his honeymoon.

Trey Harris isn’t able to walk on his own due to his autoimmune spiral arthritis, so he uses a Segway and cane in order to move around.

He says that while preparing to take a JoCo cruise, he alerted United Airlines that he’d be brining along the mobility devcie during his travels.

The United rep then transferred me to the TSA disability services desk to get the OK from them as well; TSA made a notation and told me who to contact if we had any trouble getting through security. TSA then sent me an email to confirm.

Upon arriving at the gate, they were nevertheless told they couldn’t bring the device onto the plane.

After speaking to the rep, the gate agent said a “manager” had to decide. We waited a bit—by this time, everyone in the gate area had boarded—then the manager came and said no. ‘We don’t allow hoverboards, they’re fire risks.

I explained that it’s a Segway, not a hoverboard, it’s UL-certified for fire safety (with a hologram-seal certification on bottom stating this?—?I showed it to them), and one has never spontaneously combusted like those cheap hoverboards everyone was buying a couple years ago did. You could buy one on Amazon, even after they announced they wouldn’t sell hoverboards anymore.

The manager was unswayed. “We don’t even allow Samsung phones, we definitely won’t allow that.” (I did not point out that I hadn’t seen anyone asked to show their phone at the gate, and so how did he know there wasn’t a Samsung phone on board?)

Ultimately, after the scuffle delayed the flight, Harris gave in and agreed to leave the Segway behind.

Finally, as they’re about to close the doors (were they really going to push off with all our things onboard?), I pointed to it and said, “What if I just left it right here,” in front of the gate?—?“will you let us board without it?” The gate agent grumbles that we could’ve done that at the start without all this trouble, and then lets us board?—?me hobbling on my cane down the jetway. We take off, and my honeymoon starts with me sobbing for an hour, my husband consoling me. I felt humiliated, like all the passengers blamed me for the delay.

While on the trip, Harris had to purchase a scooter that cost hundreds of dollars of rent — and he was threatened with arrest for abandoning his Segway at the gate. (He ultimately wasn’t arrested.)

I’ve since done more research and can find no reason whatsoever that this should have happened. I did everything I was supposed to. I had the policies and regulations behind me. I’ve sent a letter—a real, paper letter, since I hear that gets better results—to United Airlines, but so far have heard nothing.

I don’t care if United Airlines compensates me, not even for the scooter rental. An apology would be nice, but I’m not expecting miracles. I’d just like them?—?or another airline, if they refuse?—?to assure me I’ll be allowed to bring my mobility device with me the next time I fly.