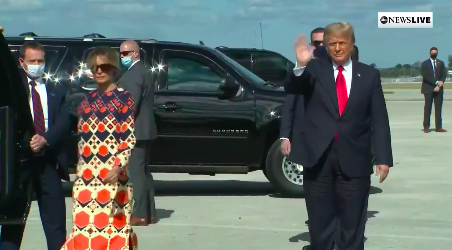 Melania Trump is done. She’s over it. Out. Wants nothing to do with it. Finished. Прощай. Goodbye.

Video of the ex-FLOTUS totally snubbing photographers after arriving in Florida from Washington, D.C. has gone viral on Twitter, racking up over 5 million views in less than 48 hours.

The former first couple was met by the press when they arrived in Palm Beach late Wednesday morning. Upon disembarking the plane, Melania, looking pool ready in a silk Gucci caftan and big designer shades, didn’t bother to stop and pose for photographers, leaving Donald standing awkwardly by himself on the tarmac.

Melania’s snub was a fitting end to her tenure as FLOTUS, during which she often refused to hold her husband’s hand in public, looked uncomfortable posing for photographers, eschewed tradition, and appeared totally disinterested in the role.

Though Trump claimed in his farewell address Wednesday morning that Melania was “so popular”, the latest CNN/SSRS poll actually found she has the worst favorability rating for a departing first lady in polling history, with 47% of participants viewing her in a negative light.

I’m gonna miss her so much… pic.twitter.com/Bkcj5YCnbp

Melania is doner than done. Lady got on the plane wearing designer threads and louboutins and got off the plane in a muumuu and flats.

“Work” done. Kaftan on. Melania is over it. pic.twitter.com/xKll6tKrBG

The countdown begins!
How long will it take for #MelaniaTrump to drop the Orange Douchbag's hand forever??? ? pic.twitter.com/lyX4Hb8GVV

Melania in the car pic.twitter.com/V6cATRnurT