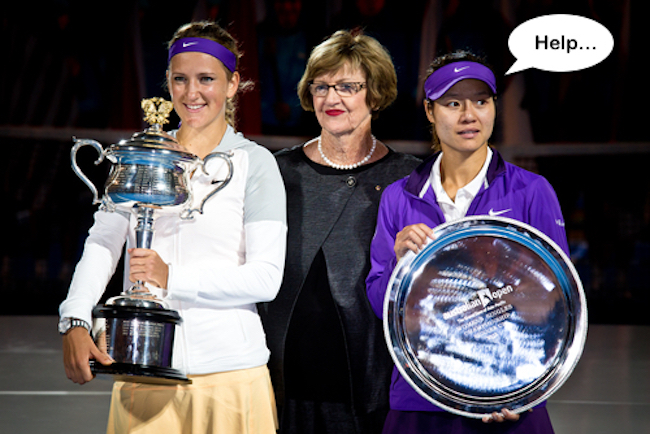 “I am disappointed that Qantas has become an active promoter for same sex,” she primly wrote to The West Australian newspaper.

She would very much appreciate it if fellow antigay travelers would avoid using the airline “where possible.”

“I believe in marriage as a union between a man and a woman as stated in the Bible.

“Your statement leaves me no option but to use other airlines were possible for my extensive traveling.”

Meanwhile, Virgin — another leading domestic airline for Australians — and founder Richard Branson are also very much in favor of gay marriage.

Earlier this month, we reported that Qantas chief executive Alan Joyce had a pie smashed in his face by hatchet-faced Tony Overheu in front of several hundred people during a business breakfast.

Overheu said his pie-flinging was in response to what he called “corporate bullying,” inspired by the fact that Joyce and 20 other chief executives showed their support for marriage equality by signing a joint letter.

Police charged him with assault and he was subsequently banned by Qantas.

74-year-old Court is a senior pastor at Perth’s Victory Life Church and for decades has been a vocal critic of homosexuality and marriage equality.

In her haughty letter, she writes that she’d praised Qantas during her long-ago days “of never losing a tennis match while playing for my country.”

“I love all people and will be pleased to talk to your board at any time.”

“But it won’t be in the Qantas lounge.”

Sounds like someone’s face really wants to go on a blind date with a banana-creme pie.