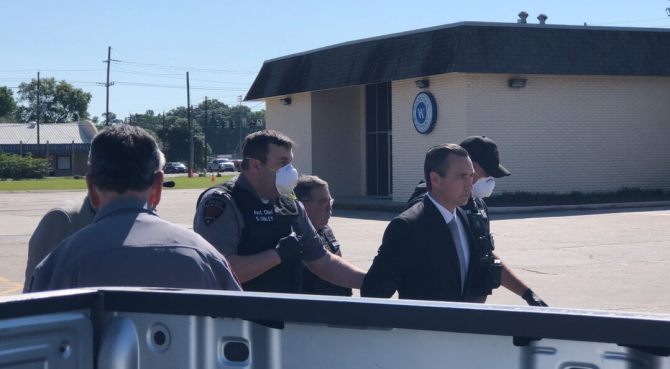 Things are finally catching up to Pastor Tony Spell of the Life Tabernacle Church in Baton Rouge, Louisiana. After refusing to cancel church services because of coronavirus and nearly running over a protestor with a bus, he’s finally been taken into police custody.

Just to recap: Last month, Spell was charged with six misdemeanors after he bussed in over 1,800 people for his Sunday service. He insisted that “God will shield us from all harm and sickness!” Since then, at least one of his parishioners has died of COVID-19 and his personal attorney is currently in the hospital after testing positive for the virus.

Related: Lawyer for defiant pastor hospitalized for COVID-19 insists he didn’t get the virus at church

Then on Sunday, Spell got into a heated altercation with Trey Bennett, who was protesting outside of the church with a sign that read “CAUTION: Coronavirus incubator. Do not enter. You may die.” The interaction ultimately led to Spell backing up a church bus in Bennett’s direction.

The entire thing was caught on video.

#BREAKING Central Pastor Tony Spell has a warrant out for his arrest for an incident with a protestor that happened on Sunday. Watch below. ?? ???? @BRProudNews pic.twitter.com/mEaSJkPpt5

“At first I thought he was just turning around his bus and was going to pull away,” Bennett told local media, “but he just kept coming in reverse.”

“I could see him driving the bus. He was honking his horn loudly at me and making gestures suggesting he was yelling while he was driving.”

Yesterday, Spell was arrested in his church parking lot and charged with aggravated assault with a deadly weapon. Footage of him being handcuffed began circulating online shortly after he was booked into the East Baton Rouge Parish Prison.

After being booked into jail and having his mugshot taken, Spell was released a few hours later. He now says he plans to hold yet another service at his church tomorrow evening.