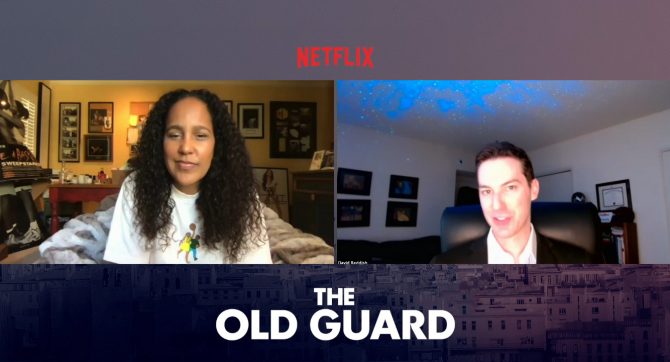 An upbeat, warm woman, her 2000 debut feature Love & Basketball made a splash for its depiction of a romance between a man and woman who are both avid basketball players. Her spec script for the film–which she sharpened with the Sundance Institute–ignited a bidding war, with another Hollywood maverick eventually winning the producing rights: Spike Lee.

The Secret Life of Bees, her follow-up film made eight years later, starred Queen Latifah, Dakota Fanning, Jennifer Hudson and Alicia Keys, and also earned her critical praise. The film inverted the tired “white savior” trope employed in movies such as The Help and Green Book to feature a young white girl saved by her friendship with a group of African-American women, and the art of beekeeping. Beyond the Lights, her 2014 directorial outing, told the story of an international pop star who falls for a blue-collar cop.

Now Prince-Bythewood returns with her most unconventional story to date. The Old Guard, based on the graphic novel by Greg Rucka & Leandro Fernandez, tells the story of a group of immortal warriors led by the world-wary Andy (Charlize Theron). As the group rushes to protect a newborn immortal (Kiki Layne), a scientist (Chiwetel Ejiofor) and power-mad billionaire (Harry Melling) target the group to learn the secrets of immortality.

In a most refreshing twist for a sci-fi action romp, the film features a queer romance between two male immortals, Joe & Nicky, played by Marwan Kenzari and Luca Marinelli. We caught up with Prince-Bythewood to talk about her first foray into action, and about anchoring the film’s romantic subplot with two gay characters.