Tuesday, Jan. 22, Hollywood wakes up early in anticipation of Academy Award nominations, as the final stretch run of the Awards Seasons come into public view.

Lady Gaga fans, keep your pants on. Her name will definitely get a mention Tuesday morning, if not for Best Actress, then for Best Original Song.

Just to be clear, the following list is not a prediction. This is really our wish list of what might land on the Academy roster, in our perfect queer world.

These performances won us over this year with tenderness and fury. Voting hasn’t ended yet, so Academy members, if you’re reading this, we humbly submit these names for your consideration.

One of the most competitive categories of the year, we could easily see Nicole Kidman scoring here for Boy Erased (which we would love) or Regina King for If Beale Street Could Talk (which may happen). In the “likely” column however, Weisz & Stone have a lock for their campy-sadistic-fun performances in The Favourite. These three other women who will likely go overlooked, which is a shame. Hall does a lot with her role in Hate, and is magnificent in a scene where she discusses forgiving her cheating husband. Madsen sobs like few actresses ever have in 1985 (and made us do the same), while Swinton plays three major characters—including a man—in Suspiria. If we had our way, she’d take home the statue.

Chalamet makes us swoon. Elliot makes us sigh. Grant makes us do both, with a fine peppering of giggles. The three of them will likely score actual nominations Tuesday, with our favorite Grant leading the pack. We’d also love to see Grace, who made one of the year’s most loathsome villains in Klansman. Ditto, Cedric the Entertainer, who gives a rich and unexpected dramatic performance as a frustrated preacher in First Reformed.

Colman, McCarthy and Close will probably vie for the actual Oscar gold, and at this point, it’s anyone’s guess who might win. Regina King is hogging all the glory for Beale Street, and while we love her, Layne actually anchors the piece with a performance equal parts naive and resolute. Stenberg, however, gave the most overlooked turn of the year in Hate. Hers is a tour-de-force of emotional fury, a perfect mix of rage, joy, and sorrow. Even if she doesn’t get the nomination Tuesday morning, we’re confident she will end up in this category one day.

Possibly the weakest category this year, Washington & Malek will likely earn spots for their fine and immersive outings. Everett gave the performance of his life as Oscar Wilde in The Happy Prince, while Smith—hereto best known as The Riddler on Gotham—proved he’s capable of so much more. Hawke, however, gets our pick for the best leading actor performance of the year with his tortured, self-harming minister in First Reformed. In a career of fine performances, the actor gives his best.

Cuaron is always the biggest star of a Cuaron movie thanks to his impeccable technique, and Roma will probably earn him his second Oscar statue (when will he direct a Star Wars movie?). Jenkins, Lathimos and Heller will also probably land spots among the nominees, and all showed off spectacular ability in their films. That said, we think Lee should have his due for his second best movie ever. 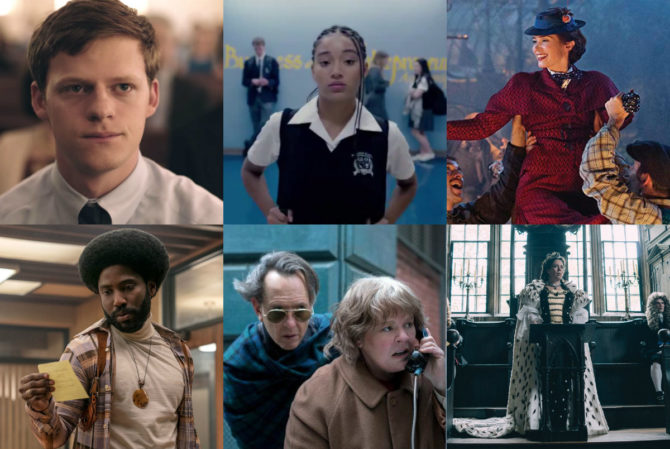 The academy can now nominate up to ten movies, which is almost too many. This year we expect to see crowd-pleasers like Bohemian Rhapsody, A Star is Born and Black Panther counted among their ranks, along with art-house hits like Roma. For the other spots, we humbly submit these titles. Most have a good chance of landing a spot on the actual academy list. Other, overlooked treasures like 1985 and Boy Erased don’t stand much of a chance.  What will take home the top prize? We can’t say for sure yet…though at Queerty, we do always love a queen.

The Academy Award nominations will be announced Tuesday, January 22 at 8am EST.