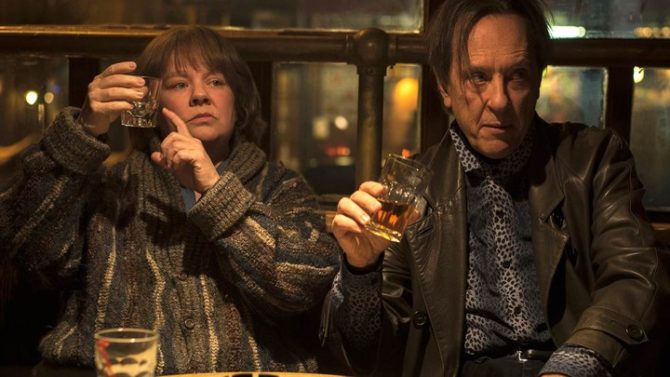 As 2018 draws to a close, we are snuggling on the couch and Blu-Ray, and maybe even some chill company. Or, failing the company, at least some a lot of comfort food and even more comforting cocktails.

But we digress. 2018 has offered some fantastic filmmaking that has managed to provoke and move us with stories ranging from the dark to the surreal. With that in mind, we’ve taken a look back to pick out our must-see films for the year.

Grab the popcorn, pour the bourbon and get ready. These movies will have you glued to the screen.

Have suggestions we missed? Tell us in the comments.

Also known as the most overlooked film of 2018, director Yen Tan’s chronicle of a man trying to come out as gay and dying of AIDS packs one Hell of a wallop. Cory Michael Smith and Virginia Madsen give sucker-punch performances in this quiet, subtle drama.

Call it best use of a queen. The Favourite takes one of Great Britain’s worst monarchs and makes her into one of the best characters of the year. Olivia Coleman and Rachel Weisz command the screen in this sex comedy with all the pageantry of a costume epic and enough bitchy one-liners to make the queens of Drag Race blush.

3. Can You Ever Forgive Me?

Possibly the best queer story of 2018, Melissa McCarthy & Richard E. Grant ascend the Oscar race with their performances as two rather unlikable alcoholic gay besties committing literary fraud. How can we love them so? Easy: Can You Ever Forgive Me? Rests on the nuance of its characters, and the subtle ways McCarthy & Grant make them irresistible.

Director Andrew Haigh may have scored notice for the salacious series Looking, though his film Lean on Pete confirms his truer self. Stories of isolated characters searching for true love and acceptance interest Haigh, including this coming-of-age tale of an abused young man and his horse. Young Charlie Plummer proves himself a star in the making, and Haigh cements his place as one of the most interesting directors working today.

5. If Beale Street Could Talk

Moonlight’s Barry Jenkins confirms his place as one of the most talented filmmakers alive in this beautiful tale of love and tragedy. Based on James Baldwin’s novel, Beale Street has the same lyrical beauty as Jenkins’ Moonlight, and the same emotional power. A sensual tone and sexy cast only add to the appeal. Actress Regina King may be getting all the raves, but for us, the real star is KiKi Layne—a starlet in the making.

Related: ‘Boy Erased’ author Garrard Conley on defeating the ex-gay movement while “not hating” its leaders

Who would have thought that yet another attempt by Disney to strip mine its film catalog would prove this good or this fun? Emily Blunt slips into the title role with practically perfect ease, while out queer Ben Wishaw gives the film its dramatic anchor. Dick Van Dyke steals the show in this sequel with all the whimsy and eye-popping visuals of its predecessor.

8. When the Beat Drops

The world of bucking—the high-tempo dance that incorporates cheerleading and voguing—is the very essence of queer underground art: gender-fluid, fringe, subversive and open to everyone regardless of body type. Director Jamal Sims spotlights the surrogate family that has grown up around the subculture, and how gay people of color continue to make a unique contribution to LGBTQ—and American—culture.

Yet another overlooked gem in 2018, Annihiliation also had one of the most overlooked LGBTQ characters in Tessa Thompson’s lesbian soldier, Josie. Creepy, visually breathtaking and always captivating, Annihilation has everything a great thriller, and a great sci-fi film, needs.

Call us sappy, but we can’t help but gush over this celebration of the life and love of Fred Rodgers, the man who brought his neighborhood and his life philosophies to millions of kids’ TV screens. Learning that the Mr. Rodgers of TV was the same, pro-LGBTQ peacenick behind the scenes gives us comfort and hope.

Love, Simon is one of the best things to happen to the movies in recent memory: a romantic comedy about a gay teen boy produced by a major Hollywood studio. Such a film would be unthinkable until it came along. Thanks to the clout and courage of director Greg Berlanti, teen love has finally come to tinseltown.

The Favourite may have the best use of queens, though only one movie puts Queen to good use: Bohemian Rhapsody. The finally-out-of-Development-Hell biopic of Queen singer Freddie Mercury made for some fine entertainment courtesy of the iconic songs by the band, and a fine performance from Rami Malek in the lead. Malek comes out with guns blazing, capturing Mercury’s mesmerizing mix of exuberant homoeroticism and near-crippling vulnerability. Commence headbanging!

Runners up: Scotty & the Secret History of Hollywood, Colette, A Star is Born, Destroyer, Suspiria, Making Montgomery Clift, Giant Little Ones, McQueen, Man Made, Mario, The Happy Prince, A Moment in the Reeds, Black Panther, Crazy Rich Asians, The Miseducation of Cameron Post