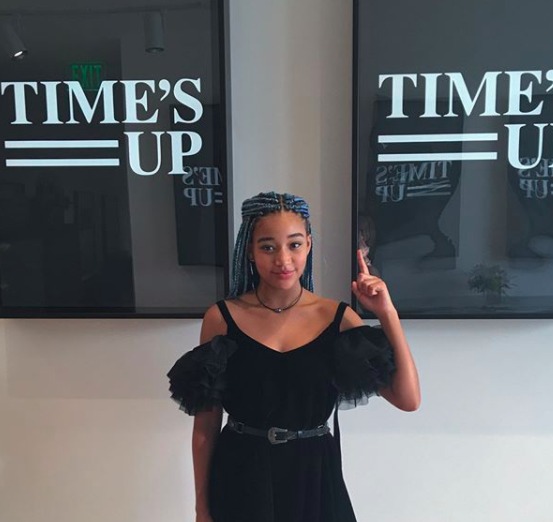 This profile is the first in a series of posts about young LGBTQ activists out to make change in the 2018 Queerties category Up & Coming.

Amandla Stenberg first made a splash as an actress back in 2012 in the pivotal role of Rue in The Hunger Games. As soon as the movie debuted, Stenberg endured trolling readers of the book who apparently overlooked the fact that the character has dark skin even though it came from a what one would think was a credible source: author Susan Collins, who described her that way.

Whereas thinner-skinned stars of any age might have shied away from the attacks, Stenberg embraced them with grace, speaking of how much she loved working on the film, and taking pride in the finished product. Her work in the movie also led to a string of new roles in television and film.

She also revealed thereto unknown musical ability, playing violin and singing on an album with Zander Hawley. Stenberg even released her comic book, Niobe: She Is Life with co-writer Sebastian Jones back in 2015. She even appeared in Beyonce’s “Lemonade” video, which makes her all the more cool.

At the height of her fame, Stenberg earned a place on Time magazine’s Most Influential Teens for two years in a row, in 2015 & 2016. In interviews she’s come out as gender fluid and bisexual, and identifies as a feminist. With her career in full flourish at just 19 years old, Stenberg still makes time to attend New York University as a film student. Meanwhile, her Instagram has 1.5 million followers. Yep, that’s million.

According to Stenberg, “Amandla” means “power” in the Zulu language. Her parents may not have had a life as an activist, musician and actress in mind when they named their daughter. Either way, it has proved prescient: articulate and intelligent, and outspoken, Stenberg has already proven herself a model voice for the queer community, so count on hearing much more from her in the future.

Vote for Amanda in the 2018 Queerty Awards here.