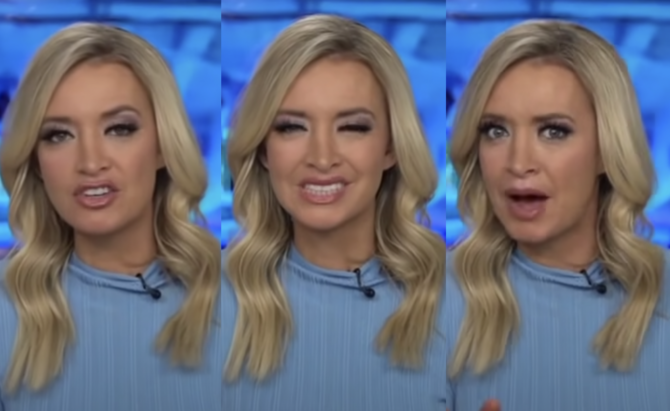 This week, Psaki was asked about Florida’s new “Don’t Say Gay” law during an interview with the “News Not Noise” podcast.

“This is a political wedge issue and an attempt to win a culture war,” she said while audibly weeping. “And they’re doing that in a way that is harsh and cruel to a community of kids.”

Related: Why is this 20-something GOP candidate from Arkansas so obsessed with sodomy and gay people?

When asked by Hannity about Psaki’s emotional interview, McEnany launched into an incoherent tangent about pervert teachers “forcing sexuality” on kindergarteners, kids “dying in the streets”, and “62 million children that do not exist, that have been aborted because of Roe v. Wade.”

McEnany shared a clip from the nonsensical diatribe on Twitter, along with the caption: “Rather than crying about forcing sexuality on Kindergarteners, cry instead for the 62 million children who can never go to Kindergarten!”

Rather than crying about forcing sexuality on Kindergarteners, cry instead for the 62 million children who can never go to Kindergarten! pic.twitter.com/B1ywxMbssy

No one is forcing sexuality on kindergarteners, Kayleigh.

That’s gotta be the weirdest and largest demographic bubble in human history.

My 3rd grade daughter thinks boys have cooties, should I be worried she’s been groomed?

Tell me which school teaches this? I’ll wait

None of this is true, but it is funny.

What are you talking about? Where was this sex talk happening in any K-3? NOWHERE!

They can’t go to kindergarten but at least they can get married in the South.

What makes me cry is the same 5 year olds need to practice active shooter drills, but we can’t talk about that right.