Tiffany Haddish and Rose Byrne headline this girl-power comedy about a pair of ladies who head up a cosmetics line. As their business runs into financial problems, the pair run afoul with a nasty business rival (played by Salma Hayek in full Devil Wears Prada mode) who plans to steal their company out from under them. Count on plenty of slapstick and campy laughs, as well as a scene-stealing performance by Billy Porter as Haddish & Byrne’s disgruntled employee.

The Stream: AJ & The Queen

For a dose of fabulous, you can enjoy laying naked on the couch, stream on with RuPaul in his new scripted Netflix series. AJ & the Queen borrows from movies like Paper Moon and To Wong Foo as it follows a famous drag queen named Ruby/Robert (played by RuPaul) on a cross-country tour. Ruby recently had his heartbroken by a scheming boyfriend who robbed him of all his cash. As Ruby tries to recover enough money to afford his own drag club, the crosses paths with 10-year-old AJ (Izzy G.), a streetwise, slightly genderqueer kid living on his own. The pair form an unlikely bond as Ruby & AJ tour the nation, evading a one-eyed crime boss named Lady Danger (played by Tia Carrere). RuPaul shows he’s more than just a drag performer: he’s an actor, and an effective one in this tailored role (Ru created & wrote the show with Michael Patrick King of Sex & the City fame). Much like the man himself, AJ & the Queen espouses themes of love and acceptance amid some very big laughs. The show also features a number of Drag Race alums like Katya and Bianca del Rio in supporting turns, as well as actors Michael-Leon Wooley, Matt Wilkas and Patrick Bristow in recurring roles.

The Quirky: Kipo and the Age of Wonderbeasts

Anyone wanting a bit of escape—one suitable for viewing alongside the niblets—look no further than Kipo and the Age of Wonderbeasts, the new fantasy series launching this week. Kipo recalls the post-apocalyptic storytelling of Hayao Miyazaki, as well as cult films like Wizards. The young girl Kipo has grown up underground on an Earth ravaged by war, and now populated by races of mutant beasts. Some, like the four-eyed pig Mando, she befriends. Others, like a mafia of six-foot-tall talking frogs, or giant rabbits, threaten her. She also crosses paths with the tomboyish girl Wolf, who teaches her a few survival skills. Quirky, weird and hallucinatory, Kipo and the Age of Wonderbeasts soars with its unfiltered imagination.

The ICYMI: Don’t F*ck with Cats

Netflix quietly dropped this docuseries in the midst of last month’s holiday hullabaloo. Don’t be deceived by the title: Don’t F*ck with Cats has very little to do with the titular pets. Rather, it focuses on the strange case of Luca Magnotta, a sometime Canadian gay porn model, hooker, and relentless self-promoter convicted of murdering Chinese student Jun Lin on camera for an internet video. Even more shocking, a group of cat lovers discovered videos of Magnotta killing kittens long before he graduated to murdering humans. Don’t F*ck with Cats follows the (excuse the phrase) cat-and-mouse game Magnotta played with said animal lovers, and their struggle to alert American and Canadian police to his increasingly violent behavior. The show also delves into the twisted life of Magnotta, his quest for fame and bizarre attention-seeking schemes. It’s a story too weird and unsettling to ignore.

The Quickie: The One You Never Forget

Morgan Jon Fox, known for the cult series Feral, dropped this short film last week about a 14-year-old boy getting ready for the big homecoming dance. Little do his parents know that he’s taking another boy as his date. Short and very sweet, The One You Never Forget recalls the jitters so many of us felt before going to the dance, and the yearning so many queer people still feel to take their real crush without fear of judgment or reprisal. The film stars Tasha Smith (Empire), Malike Whitfield (The Temptations), London Curtis, and Owen D. Stone (Cobra Kai), and should provide a bit of joy to counteract the frightening news headlines of the week.

The Sip: The RuPaul 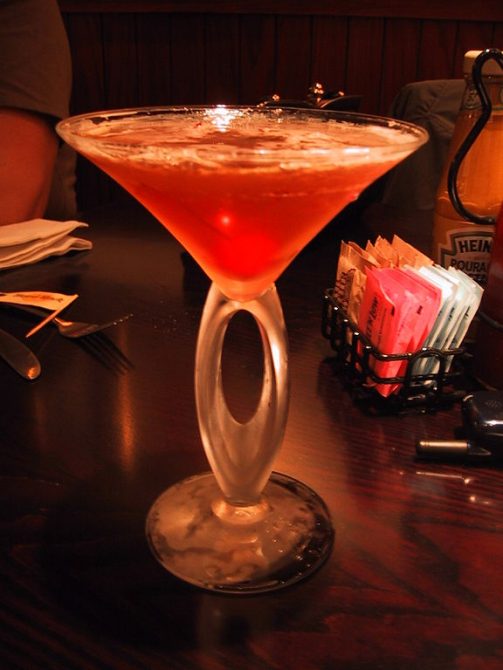 In honor of Mr. Charles taking on drama, we drink in his honor with this fruity martini named for the man himself. Even better, it’s simple to make and has enough heft to soften the horror of cat killers or football murderers.

Mix vodka & lemonade over ice in a martini shaker. Shake. Pour into a martini glass. Add a dash of grenadine to create a layering effect. Optional garnish with cherry.