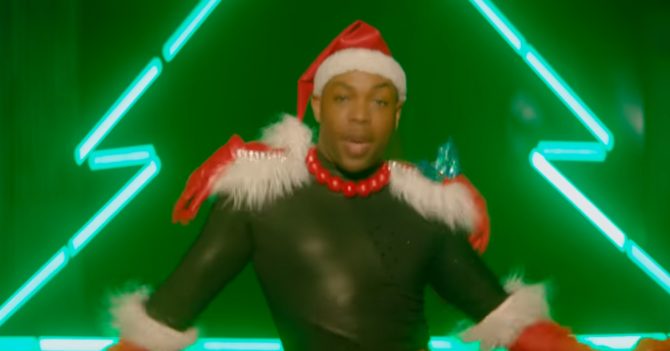 Hall filmed a new video for the holiday version of the song, titled “Bells, Bows, Gifts, Trees.” The video finds him dressed in a black leotard, Santa hat and red leather epaulets while working his moves in front of a neon Christmas tree. Hall has also packed his lyrics with references to shopping, stockings and Mariah Carey’s “All I Want for Christmas is You.” Because of course, he would.

The singer also notes that while he and his dancers did film the video during the COVID-19 pandemic, the shoot met all compliance regulations for filming. “In accordance with state and local laws and regulations, this production took necessary precautions due to the Covid-19 Pandemic, including testing for all cast and crew on set, social distancing & sanitizing of all production elements,” Hall said in a disclaimer released with the video.

This isn’t the first variation of “Nails, Hair, Hips, Heels” has released this year. In April, the singer also released a video for “Mask, Gloves, Soap, Scrubs” to raise awareness of the COVID-19 pandemic.