The Whodunnit: The Mystery of DB Cooper

One of the great American unsolved mysteries gets the feature documentary treatment this week, courtesy of director John Dower and HBO. For the uninformed, one of the most incendiary hijackings of a commercial airline happened in 1971, when a mysterious man calling himself Dan Cooper (later populated as D.B. Cooper in the media) brandished a bomb aboard a flight from Portland to Seattle. Cooper demanded $200,000 in cash and four parachutes before forcing the plane to fly to Mexico City. Along the way, he bailed out above the Pacific Northwest, never to be seen again.

Dower examines the mystery of Cooper through interviews with the still-emotional flight crew, and presents four theories as to the true identity of Cooper. The most intriguing among these hypotheses is that Cooper was actually a transgender woman, who’s gender transition helped her evade detection in the subsequent decades. The unsolved mystery of Cooper has held the world’s interest for almost 50 years, and Dower’s new doc channels all of that mystique into a compelling narrative. Viewers may not feel they’re any closer to knowing Cooper’s identity by the time the film ends, but that doesn’t mean they won’t be thinking about the mystery for days to come—which only makes the whole thing all the more entertaining.

The Iconoclastic: The Reagans

Director Matt Tyrnauer returns with his most ambitious project to date, a four-part documentary series examining the political career—and American myth—of Ronald Reagan. Tyrnauer has never shied from taking on controversial figures before (hooker/pimp Scotty Bowers in Scotty and the Secret History of Hollywood, Roy Cohn in Where’s My Roy Cohn), but never has he shown this level of brazen defiance. The Reagans argues that its titular president was far from the Saint of Americana; rather, he was a mediocre has-been actor turned commercial pitchman—a sort of Hollywood answer to Ron Popeil. Moreover, Reagan’s political views shifted depending on who was signing his paychecks, or depending on the social climate of the time. Nancy Reagan, for her part, loved playing the doting wife in public, but brandished enormous influence on her husband behind the scenes. She also relied on a psychic (yes, really) to help adopt policy and diplomatic positions. That practice becomes all the more dubious in Reagan’s second term when his Alzheimer’s Disease begins to manifest, and during the AIDS crisis, when Reagan first turned a blind eye, before further demonizing LGBTQ people as bringing the disease on themselves.

With a crop of interviews that includes Reagan’s son Ron, George Will, Colin Powell, and Dr. Anthony Faucci, Tyrnauer smashes the Reagan myth as the Man Who Rebuilt America by showing he did the exact opposite: inflamed racial tensions, encouraged urban decay, turned away from citizens in need and bankrupted the country in the process. Audacious, thorough and always riveting, The Reagans is a must for anyone that idolizes Ronald Reagan & the 1980s, and for anyone who wonders how the Republican party became so toxic.

Streams Sundays on Showtime through December 6.

The Stream: Saved by the Bell

The camp, cult sitcom of 80s and 90s Saturday morning returns. This new revival returns to the fictional Southern California high school of Bayside High, and reunites original cast members Elizabeth Berkeley, Mario Lopez, Tiffani Thiessen and Mark-Paul Gossler, teaming them with a new class of young hellraisers. In the years since we last saw them, Gossler’s Zack and Theisen’s Kelly have become parents to the very Zackesque Mac (Mitchell Hoog), while Berkley’s Jessie and Lopez’s Slater have joined the Bayside faculty. Whereas the original show went for cheap, juvenile laughs, it delighted us to see that this new version of Saved By the Bell has a higher level of sophistication, something more akin to Degrassi High. The first few episodes touch on issues of racial diversity, income inequality, gender identity, sexuality and even parental angst, while introducing a likable new cast of kids. That includes actress Josie Totah as Lexi, an uber-popular cheerleader who also happens to be transgender. Couple that with a thoughtful, commanding performance by Berkley, and Saved By the Bell hits a new level of quality. We recommend anyone that loved the original, or who loves teen stories treated with respect, give it a look.

The Catch: The Conners

The Rosanne Barr-less reboot The Conners enters its third season this year, and upcoming episodes make it of special note: transgender actress Alexandra Billings (Transparent) joins the cast in a recurring role as Robin, a foreman in the factory where Becky (Laci Gorensen) works, and a close friend of Darlene (Sarah Gilbert). COVID-19 also takes a toll on the residents of Lanford, which adds to the growing tension in the workplace. More than that we’ll not reveal here, other than to say that Billings’ role is a pivotal one, and the show continues its tradition of addressing hot-button issues with humor and courage. We would expect nothing less.

30 years ago Red, Hot & Blue, a compilation album assembled by the charity Red Hot, debuted with a singular goal: fight AIDS. With Erasure, Keith Haring, Debbie Harry & Iggy Pop, Jim Jarmusch, Annie Lennox, k.d. lang, U2, and Tom Waits, among others, each covering the music of Cole Porter, the album went on to raise $15 million for HIV/AIDS research. This year, the album gets a rerelease commemorating the success of the original, and just how far our society has come in terms of AIDS research and acceptance. Furthermore, a vintage concert of the album will drop on YouTube in honor of World AIDS Day, December 1. Give it a listen, give it a watch, enjoy the music, and remember: we still have work to do.

Rerelease debuts December 1. The concert video will debut on YouTube the same day.

The Mood-Setter: Chloe Flower’s “Carol of the Bells”

Ivory tickler Chloe Flower dons Liberace’s fur coat (yes, the actual coat) for this new take on the stalwart carol, with a sexy twist. The video for “Carol of the Bells” sees a sensually dressed Flower pluck away at the keys surrounded by some uber-fabulous genderqueer dancers. Loaded with classy, opulent settings and costumes, the video feels like a Christmas in the House of Extravaganza—which is not a bad thing in the least. With the holiday season officially kicking off this weekend, we recommend playing it at full volume…with a little voguing to boot.

The Sip: The Zack Morris 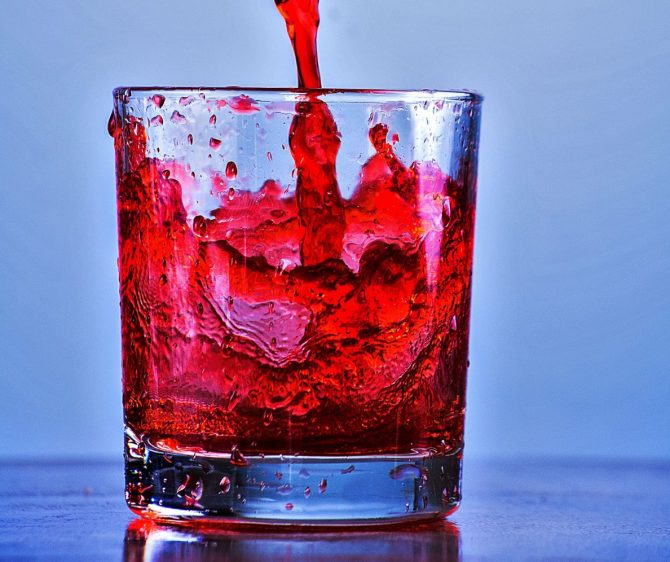 This cocktail actually started out as an April Fool’s prank, though as miraculously as the show that inspired it, it somehow found a following. It’s a simple, sweet, fruity libation, suitable for anyone who enjoys a refreshing cocktail, or for anyone who found Zack thirsty. We know there are a few of you, lord save us.