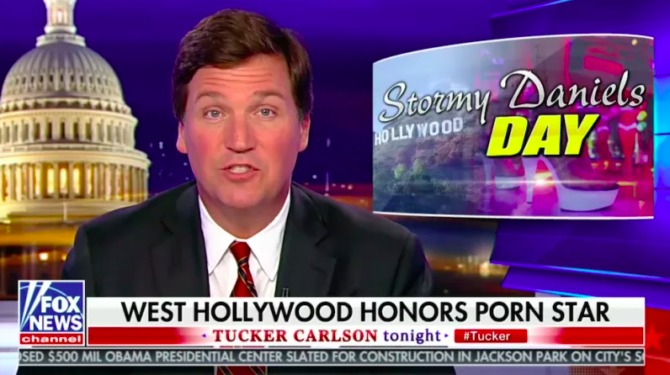 West Hollywood mayor John J. Duran officially declared May 23 “Stormy Daniels Day.” During yesterday’s ceremony, Duran presented Daniels with a key to the city for being the only person in the world able to hold Donald Trump accountable for anything.

Well, on his show last night, FOX News host and admitted gay basher Tucker Carlson and his guest, radio host Ethan Bearman, were up in arms over the whole thing.

Related: Tucker Carlson once beat up a gay guy who “bothered” him

After both men insisted they were “not familiar” with Stormy Daniels’ work and had never–never!–seen any of her movies, Bearman explained: “West Hollywood is known for its LGBT community. The Trump Administration, regardless of the rhetoric from President Trump on the campaign trail, has not been technically LGBT-friendly. The city has chosen to use her to celebrate her. She is fighting the president.”

To which Carlson replied, “Wait, hold on. A straight woman who said she had a voluntary sexual encounter with a straight man is somehow a symbol of LGBT resistance? Speak fully so I can understand.”

Because, you know, gay people are only allowed to honor other gay people.

Related: Someone threw a drink at racist homophobe Tomi Lahren during a hip hop brunch and here’s the video