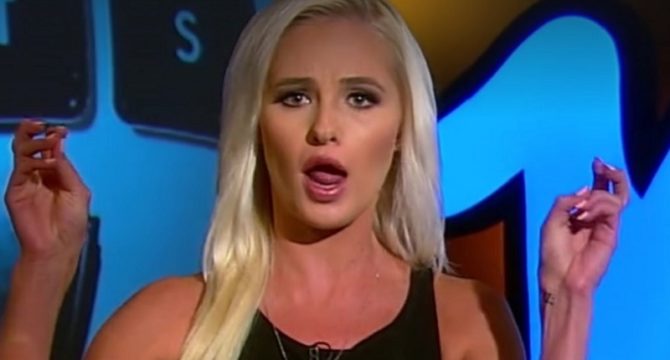 It’s been a rough week for racist homophobe Tomi Lahren.

The conservative Fox News darling, who was recently named “2nd Worst Person in the World” by voters in the 2018 Queerties Awards, was brunching with her mother at a bar in Minneapolis when someone threw a glass of water on her.

The incident was captured in a Snapchat video that has since gone viral:

Fox News anchor Tomi Lahren had a drink thrown at her at a Minneapolis bar pic.twitter.com/XIDjwZfe6H

After drying off, Lahren took to Twitter to say she was “praying” for all the “unloving” and “intolerant” liberals like Kohler out there:

The majority of the modern Left is comprised of the most unloving and intolerant people I’ve ever had the displeasure of encountering. I’m praying for you. You need it.

Then yesterday, she went on Hannity to say that underneath her racist, homophobic, xenophobic skin is a real person with actual feelings.

I think people forget I’m a real person and these things embarrass and humiliate me, and for my family, I didn’t want them to be part of this. It’s something I have grown used to. Not something I wanted to subject them to. I have a following made up in large part by young girls. I hope they’ll look at this, especially conservative girls, and realize if I can handle this with grace, they can too.

The incident has garnered responses from a range of people.

Everyone from Kathy Griffin:

I couldn’t disagree more with @TomiLahren, but I don’t think it’s cool to resort to physical actions to make your point.

The first amendment is a beautiful thing – use it. https://t.co/Yx8obh0aH0

Everybody is with Tomi Lahren, a truly outstanding and respected young woman! @foxandfriends

Look, as a general rule of thumb, you really shouldn’t throw drinks at people, even if it is only water… Of course, there are exceptions to every rule.