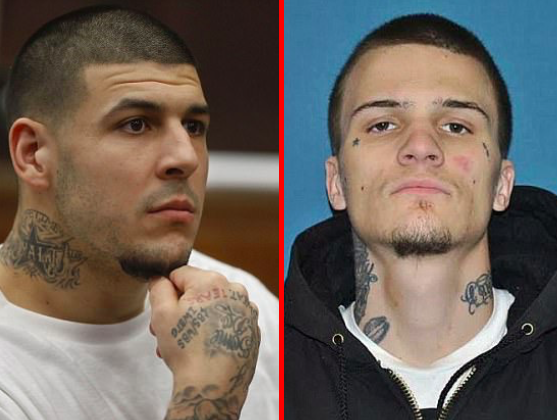 Just to recap: The former Patriots star was found dead in his prison cell last Wednesday. The cause of death was ruled a suicide (asphyxia by hanging). It was reported he left behind three suicide notes: One of the letters was purportedly to his fiancee, Shayanna Jenkins-Hernandez. The other was to their 4-year-old daughter, Avielle. And the third was to his jailhouse lover.

Kennedy is currently serving 3-5 years for armed robbery. According to the report, his family was gifted a $50,000 watch by Hernandez the day before he hanged himself in his cell last week.

After the suicide, Kennedy was put on suicide watch; however, his attorney, Larry Army Jr., says he has since been removed from the protective unit.

“My client is obviously saddened by the loss of his friend, Aaron Hernandez,” Army said in a statement. He added, “My client is no longer on suicide watch. The decision to move him to a protective unit was a standard precaution, but my client did not and has not exhibited any dangerous or risky behavior as a result of this situation.”

But in an exclusive interview with In Touch, Hernandez’s cousin, Davina Hernandez, says the former NFLer never mentioned anything about Kennedy to her, though she admits she doesn’t know exactly what his sexual orientation was.

“He’s definitely never made any mention of [having a lover in prison],” she says. “No, he would just always say, ‘I’m fine.’ He would always say he kept to himself so I don’t really know how true that is or if he just wanted us to know that he was OK. I don’t know.”

And as for the multiple suicide notes he left behind, including one rumored to be for Kennedy, Hernandez wouldn’t confirm or deny those reports.

“The original information that the family was given was that there was no letters,” Hernandez explains to the magazine. “How does that change so quickly to being three letters and then change again to who the letters were to?”

Army says that, if there is a letter, it has not yet been given to Kennedy.

“Neither I, nor my client, have seen the letter. We will be requesting that the letter be turned over to my client as soon as possible.”

Hernandez adds that she’s still processing everything and isn’t yet sure “what to think” about it all.

“I do still feel that it’s shocking that this happened,” she says. “It’s just really hard to process. I don’t know what to believe at this point.”

However, one thing, she says, is certain.

“At this point, it would best if people just let him rest in peace.”

Hernandez was laid to rest on Monday in his hometown of Bristol, Connecticut.