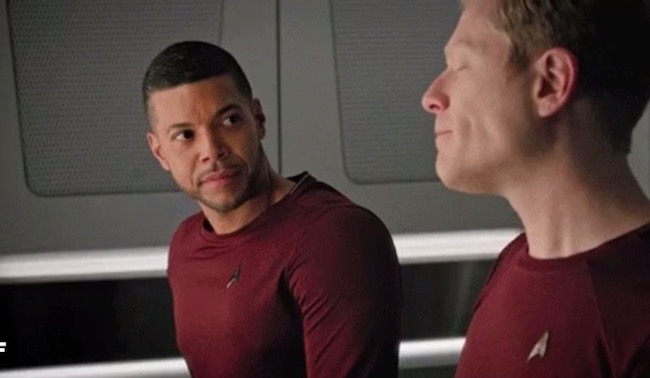 Who He Is: Actor, activist

Why He Matters:  The actor made us swoon yet again as the out-gay Dr. Hugh Culber on the hit series Star Trek: Discovery.

Why We’re Proud: Cruz brought a much-needed dose of sincerity to his role as Hugh, the chief medical officer of the Discovery. He also brought something new to Star Trek: for the first time in more than 50 years, out-gay characters appeared in the canon, and one of Puerto Rican ancestry to boot. Cruz shares the distinction with his on-screen boyfriend Paul Staments, played by Cruz’s real-life buddy Anthony Rapp. Playing gays of the future, the two made history and helped elevate Discovery in its popularity and cultural relevance.

Cruz also added to two more acclaimed performances to his resume in the past year, with guest spots on EastSiders and 13 Reasons Why. More importantly, though, Cruz–who’s spent virtually his entire career out of the closet–spoke about the importance of living an honest and authentic life. In a National Coming Out Day interview with People, Cruz disclosed how, after landing his breakout role on the pioneering My So-Called Life, he came out to his parents, who kicked him out of the house. The then-19-year-old lived a homeless life before filming began on the series, and a healthy paycheck helped him afford an apartment.

Flash forward. Cruz has reconciled with his dad and become a much-respected performer on stage and screen.

Tragedy struck close to home for Cruz at Orlando’s Pulse nightclub in 2106, when a mass murderer opened fire with automatic weapons. Cruz’s mother’s stepsister, Brenda Lee Marquez McCool, was among the 49 people who have died.

“Brenda went to Pulse the way she frequently did, with her 21-year-old openly gay son, Isaiah,” Cruz told ET. “They loved to go there on that night because it was Latin night and they could be with their friends, dance salsa and find refuge in a safe space.”

Wilson continues to be a powerful advocate for LGBTQ causes, particularly those affecting queer teens. It’s also what makes us particularly proud of Wilson this pride season.

For someone who makes a living playing other people, Cruz’s best role comes unexpected: himself.