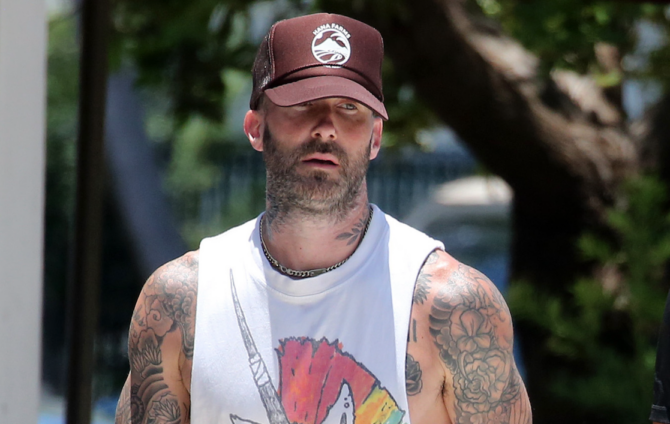 No, Maroon 5 hasn’t put out any new music, but frontman Adam Levine is definitely trending.

The musician has landed himself in an off-key controversy after his DMs started to leak this week. In the messages, Levine, who has been married to model Behati Prinsloo since 2014, gets more-than-flirty with other women.

Instagram model Sumner Stroh kicked off the accusations by saying she’d had an affair with Levine when she was “young” and “naïve.” In a TikTok video, Stroh shared snippets of their conversations, which began when Levine reached out to ask her if he could name his new baby “Sumner”:

embarrassed I was involved w a man with this utter lack of remorse and respect. #greenscreen

Levine responded with a statement on Instagram denying the affair took place, but admitting that he “crossed a line.”

“A lot is being said about me right now and I want to clear the air,” he wrote. “I used poor judgment in speaking with anyone other than my wife in ANY kind of flirtatious manner. I did not have an affair; nevertheless, I crossed the line during a regrettable period in my life.

“In certain instances it became inappropriate.

“My wife and my family is all I care about in this world. To be this naive and stupid enough to risk the only thing that truly matters to me was the greatest mistake I could ever make. I will never make it again.

One Twitter user offered this revision to the text:

But the damage control couldn’t stop the story, and soon two other woman — comedian Maryka and Instagram model Alyson Rose — shared messages they also claim they had with Levine.

In an Instagram story that’s since gone viral, Maryka alleges Levine messaged her, “Holy f*ck. Holy f*cking f*ck. That body of yours is absurd.”

Related: Mexican actor Polo Morín opens up about being outed, blackmailed, and having his nudes leaked

The clip was reshared:

Then the memes started flooding in:

The funniest thing I’ve ever made and I’d course it has to be about Adam Levine pic.twitter.com/IFKSMm0jMa

I had no idea that Adam Levine was so into HTML. pic.twitter.com/eTX3qmrYtP

Pennsylvania lieutenant governor John Fetterman, the Democratic nominee for the US Senate against Republican Dr. Oz, even got in on the action:

Related: Audio of anti-LGBTQ lawmaker’s speech at gay son’s wedding leaks and the tweets are brutal

But of course, the gays delivered for the win:

Adam Levine actually was cheating with him pic.twitter.com/W7fpQ5dyvp

Adam Levine and I even went fossil hunting together ? pic.twitter.com/i5l2SHacO5