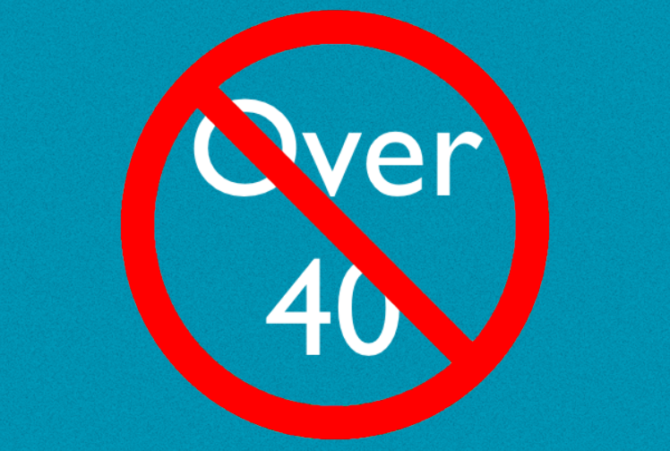 “No” might be the unsexiest word in the English language. But I suspect that if someone were to do the research, he or she would discover that’s it’s the one most commonly used in Grindr profiles.

For a community that’s so intent on demanding acceptance from outsiders, we seem to extend so little of it within.

At the risk of showing my age, I must say “No oldies” has a particularly brutal sting, perhaps partly because so many guys who go there can’t resist twisting the knife by expounding on it.

“I already have a dad–don’t need another one,” with its suggestion of paedophilic tendencies for anyone of a certain age who dares to approach a fresh young thing, seems to be a favorite. There’s an extra layer of hostility there. It’s almost as if they’re actually saying, “It’s not just that I’m not attracted to your kind. Why do you even still exist?”

The grand irony is that, unlike the other categories of “No,” older is something we’ll all get to experience eventually, if we’re lucky enough to live that long. And as someone who has lived long enough to hear the gay death knell toll on my 40th birthday, I can confirm that youth is frighteningly fleeting; the gay death knell tolls for you much sooner than you think.

But there’s another twist: Despite my advanced age (which I choose not to reveal in my Grindr profile because, as a black man, I’m already subject to quite enough stereotypical sizing-up, thank you), most of the messages I receive on Grindr are from guys in their teens and twenties–many of whom insist they don’t want anything to do with anyone over 30.

Usually, I’ll ignore them the way I do profiles with any kind of “No” list, even if none of them apply to me. But sometimes I can’t resist calling them out for hitting on a dreaded “daddy.”

“That’s OK, man. You don’t look it, and you’re hot, so it doesn’t matter. But it’s up to you,” he wrote back within minutes.

Related: The Trump effect: How American politics are ruining gay etiquette and making us meaner

So if it doesn’t matter, then why mention it? If you are going to bother putting age restrictions in your profile, if you are going to risk making any “oldie” who happens to read it feel inferior just so you can avoid having to hear from undesirables, shouldn’t you at least have the integrity to stick to your ageism?

The more I thought about it, the more I realized the rejection of older men on Grindr has nothing to do with numbers. It’s just another form of prejudice. It’s not that they’re not looking for another dad. That really goes without saying. Grindr is about a lot of things, but incest isn’t one of them. What they’re really saying is that older equals not hot, which is not only offensive, but it’s an urban myth. After all, have you seen Ryan Reynolds, 40, Ryan Phillippe, 42, Mahershala Ali, 42, Will Smith, 48, or Viggo Mortenson, 57, lately?

It’s one thing to look for a match who is close to your age because you’ll probably have more in common with him. But guys are constantly reminding me that Grindr is a hook-up app, not a match-making one. And so the implication of age restrictions, as with race restrictions, is that the prohibited group is unattractive: Yuck! Who wants to go to bed with someone like that?

The great thing about meeting guys online is that, unlike in a bar or club, if you don’t fancy a suitor, you can just ignore him. But, despite the higher likelihood of having to deliver an awkward rejection in a bar or club, no one walks around in public wearing signs that say “No Asians” or “No oldies.”

Has the gay community been so overtaken by the “mean girls” mentality in the internet age that we can’t just ignore messages from people we don’t find attractive? Is it absolutely necessary to make pre-emptive strikes so that they won’t clutter our precious inboxes with yet another “Hi”?

There are a lot things that frustrate me about Grindr, but something I’ve always appreciated is that there’s no built-in way to specify race and age restrictions. Guys have to put those in themselves.

And if it’s important enough for you to include, this is one oldie-but-(alleged) hottie who won’t be biting the bait.