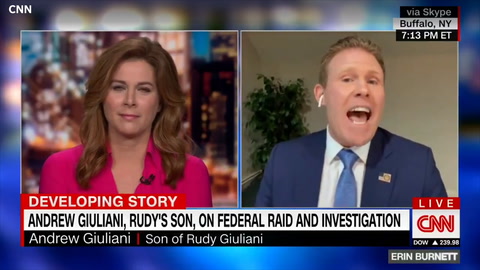 Rudy Giuliani’s son, Andrew, did his father absolutely no favors when he went on CNN last night to defend him after the FBI raided his Manhattan apartment amidst a federal investigation into his shady dealings with Ukraine.

During a wild 10-minute back and forth with Erin Burnett, Andrew looked like a petulant child as deflected questions, hurled accusations, and rattled off conspiracy theories, including one about the judge who signed the search warrant.

Related: Audiences were not impressed by Andrew Giuliani’s insane press conference after his dad’s FBI raid

“Who appointed the judge?” Andrew asked Burnett. “President Barack Obama! You have an Obama-appointed judge who has signed this warrant where no other judge would sign this warrant!”

To which the CNN host countered, “You have proof that no other judge would sign the warrant?”

“I don’t have any proof,” Andrew admitted. “But do you have proof that any other judge would sign the warrant?”

Throughout the interview, Andrew tried dodging questions by mentioning Hunter Biden any chance he got.

Related: Everyone is convinced Andrew Giuliani and Eric Trump are the bastard sons of Gary Busey

When asked if his dad would provide investigators with information about Donald Trump, he replied, “What I would say is, I do wonder if Hunter Biden is going to be charged with the allegations that are out there against him.”

So far, Rudy Giuliani hasn’t been charged with anything and denies wrongdoing.

Watch the full interview below.

Andrew Giuliani vigorously defends his father, Rudy Giuliani, saying Americans should trust his integrity as the “the greatest mayor in the history of New York.”

“I am not concerned at all because I think this is the … corruption of the Justice Department.” pic.twitter.com/DAkRxnV0M0

Now, here’s what folx on Twitter are saying about it…

Big fan of the "Every American should be outraged that my shady dad is finally facing consequences" style press hit. I thought Don Jr and Eric had perfected it, but Andrew Giuliani is really reinventing the genre.

PLOT TWIST: What if it turns out Andrew Giuliani is actually the dumbest Trump? pic.twitter.com/0MiCK3fece

I just learned what Andrew Giuliani looks like. Unsettling.

@ErinBurnett is a national treasure. This interview with Andrew Guliani is nuts #RudyGiuliani

I’m not sure which is worse: being Rudy Giuliani’s son, or looking like Andrew Giuliani.

Andrew Guliani is about as smart as Eric Trump…