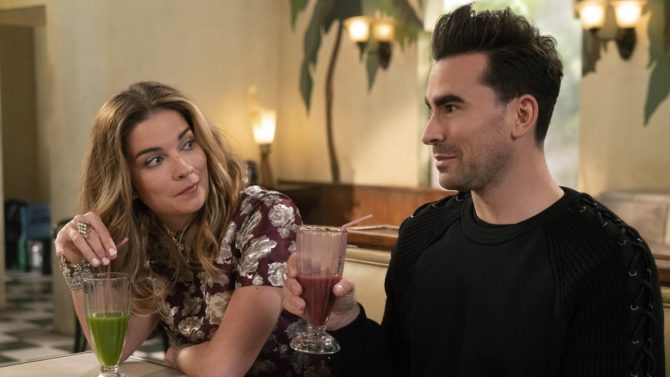 Emmy-winning actress Annie Murphy has revealed that she counts herself among the scores of Schitt’s Creek fans hoping for a feature film follow-up to the show. In fact, Murphy so wants to see the movie happen, that she’s taken to bribing series scribe Dan Levy.

In a new interview with Us Weekly, Murphy details her own thirst to return to Schitt’s Creek and her character, Alexis.

“I’ve been sending Dan [Levy] $5 a day in the mail as a bribe,” Murphy quipped. “So far, I have not heard back about a movie officially. But, oh, my God, I would be just over the moon if that ever came to pass because I miss everyone so much every day.”

“Just to see Moira again, I would pay a lot of money to do that,” she added. Murphy then went on to speculate about a potential plot for the film.

Related: Dan Levy isn’t happy about this kiss being censored out of ‘Schitt’s Creek’

“Did David and Patrick adopt a kid?” Murphy postulated. “I sure hope Alexis doesn’t because I think she is perhaps not quite in that yet, but, I don’t know. I just want to see everyone on screen again and I will be a happy camper. … We were very lucky to have an amazing group of writers on this show. My mom and dad have been rewatching the show because they miss me and my mom keeps reminding me of lines that I’d completely forgotten about.”

Dan Levy, for his part, has hinted that a Schitt’s Creek movie could happen, if he found the right story. He responded to Murphy’s comments in an interview with Town & Country.

“That pesky woman,” Levy joked. “No, not right now. I hope eventually. Listen, I love everybody so much. I love Annie, even for hinting at that. We had such a great time making the show and I think if the idea is right, I would love to explore what a movie could look like. But, I don’t have that idea yet. I’m still searching for it. So, my fingers are crossed, but I also think you need to give people a little time to miss you. So, I’m taking some time and we’ll see what happens in the next couple of years, but my fingers are tightly crossed.”

By the time its final season aired in the US last year, Schitt’s Creek had become a cultural phenomenon. All four principal performers on the show–Eugene Levy, Catherine O’Hara, Murphy and Dan Levy–won Emmys for their performances. Levy also made history, becoming the first performer to take home Emmys for directing, writing and acting in a show all in the same night.