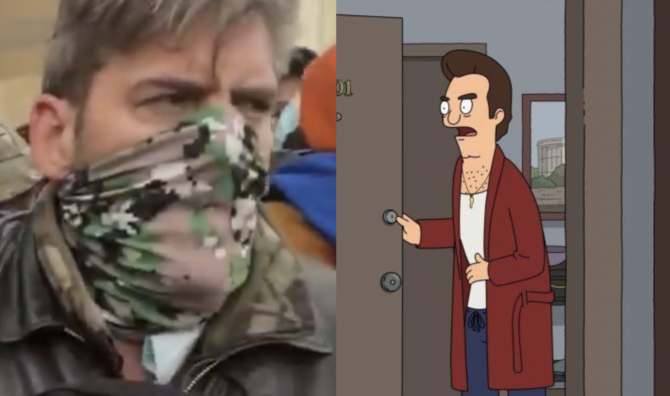 Although most people with eyes seem to agree that actor Jay Johnston, whose TV credits include Bob’s Burgers, Arrested Development, and The Sarah Silverman Program, attended the deadly insurrection of January 6, the FBI has been tirelessly trying to identify a man known as “No. 247” for months.

The #FBI is still seeking information on people who took part in the violence at the U.S. Capitol on January 6. If you know this individual, visit https://t.co/iL7sD5efWD. Refer to photo 247 in your tip. pic.twitter.com/CetMHzU190

Now, the Daily Beast reports that two different people who worked with Johnston on his upcoming film Wing Dad say the 53-year-old actor, who nobody has heard from in months, confessed to going to the U.S. Capitol on January 6 to protest “election fraud.”

The film’s director, Lucas Astrom, says he asked Johnston point blank if he was at the insurrection because “I feel like that’s a really big offense to our democracy and our nation.”

“But he said he was just at the protest and didn’t go into the Capitol physically, so I have to take him at his word on that,” Astrom says. “He hasn’t been convicted or served or arrested.”

“But yeah, I asked him about it, and he said like, yeah, he was there, and he believed there was fraud and just wanted to show his support.”

Related: “Ratched” actor who participated in Capitol riots is selling t-shirts to cover his legal expenses

The Daily Beast reports that another actor in Wing Dad corroborated Astrom’s claims but they asked to remain anonymous. Astrom added that when he learned Johnston was a ringwing fanatic, he was completely taken aback.

“I think we were shocked more than anything. It’s almost like going to a family dinner with people you’ve known for a while and then someone gets a little too drunk and starts talking crazy. You know what I mean?”

Johnston isn’t the only D-list actor who allegedly participated in January’s failed MAGA coup. In June, FBI agents raided the North Hollywood home of actor Siaka Massaquoi after he was seen in videos taken inside the U.S. Capitol building on January 6.

Massaquoi, who appeared in two episodes of Ryan Murphy‘s Netflix series Ratched as priest named Father Adeyemi, has to resort to selling t-shirt on Instagram to cover his legal expenses.

Last week, it was reported that Johnston was officially banned from the long-running animated sitcom Bob’s Burgers, where he has had a recurring voice role since 2011.