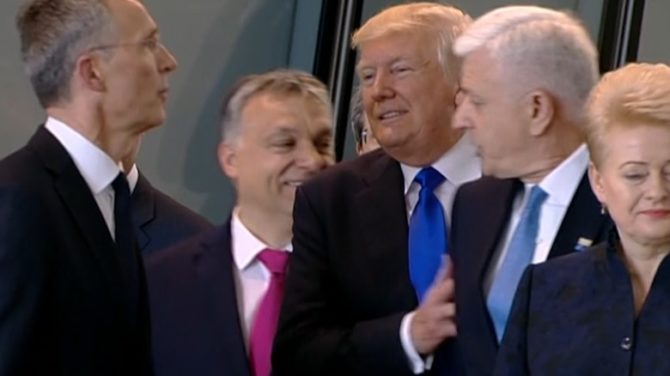 There is nothing Donald Trump won’t do to be the center of attention… including shoving another world leader out of the way so that he can occupy the prime real estate of a photograph.

And at the brand-new NATO headquarters in Brussels today, he did just that.

Cameras caught Trump literally shoving Prime Minister Dusko Markovic of Montenegro out of his way, then cockily adjusting his suit as he planted himself in the front of the group for a photo opp:

Here it is again in slow motion:

Slo-mo: Trump appears to push aside/shove another NATO leader to get to the front of the group. pic.twitter.com/K0OC6QnEL4

It was Trump’s first NATO summit, where he met with 27 other members of the military alliance.

Yes, NATO is the same alliance he spent all of 2016 badmouthing. And no, the other members did not forget what he said about them while he was on the campaign trail.

According to the Washington Post, the European leaders “gazed unsmilingly” at Trump while he gave a speech. Afterwards, he “was left largely on his own after the speech as leaders mingled and laughed with each other, leaving the U.S. president to stand silently on a stage.”

Donald Trump shoved a prime minister at a NATO summit, but he probably had a good reason, like fundamentally not caring about others.

Donald Trump is an international embarrassment.

NATO, the Pope, Melania hand slap. I'm loving the media cycle this week. The world is reacting to Donald Trump like we should be #resist

Not surprisingly, the gentleman Donald Trump shoved is from Montenegro, which just defied Russia by joining NATO. https://t.co/MUlzOYIfUz

At an event that, in part, was to welcome Montenegro into NATO, Donald Trump shoved the PM of Montenegro, to get in front for pictures.

Donald Trump, in that grotesque alpha manner of his, shoves his way to the front of the NATO group.pic.twitter.com/k6w1f78MXX

Watching events at NATO and thinking Donald Trump is to statesmanship what Eddie the Eagle was to aerodynamics.

Somebody should tell Donald Trump that if you need to shove your way to the front, you don't belong at the front.