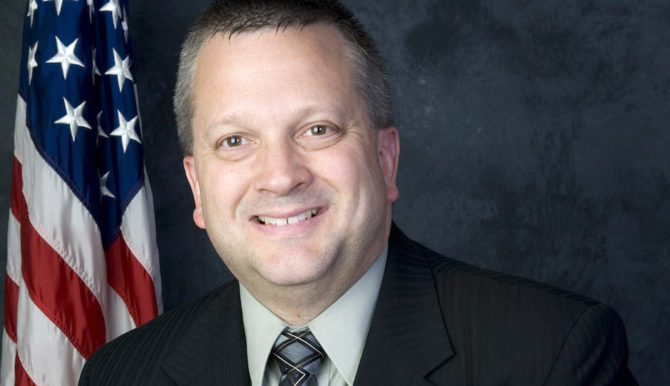 Daryl Metcalfe, the Pennsylvania lawmaker who became internet famous last year when he had a panic attack and cried “I’m a heterosexual!” after a male colleague touched his hand, is pulling more dirty, antigay tricks.

Metcalfe’s reelection campaign has come under fire this week after sending out a mailer attacking his Democratic opponent, Daniel Smith, Jr., for being married to a man.

In the mailing, Metcalfe calls out Smith for being endorsed by “liberal gay activist groups,” and then uses a photo of Smith with Gov. Tom Wolf and another man, identified as Smith’s husband in quotation marks.

When asked by CBS Pittsburgh why he wrote the word husband in quotation marks, 55-year-old Metcalfe said, “Because that’s not what I’m calling him. That’s what he’s calling him. Marriage is between a man and a woman.”

Related: Rep. Daryl Metcalfe: Over 750,000 Pennsylvanians “Too Lazy” To Vote

He added, “The majority of people that believe that marriage is between a man and a woman, I think some of them will certainly make a decision on what he’s advocating for and who’s supporting him.”

Smith, who was a was a life-long Republican before switching parties recently, calls Metcalfe’s mailer “sad” and “ignorant,” adding that when he first learned about it, “I felt sad that we’re in a world, especially when what happened over the weekend, someone has to resort to something like that.”

He also said that, as a lawmaker, Metclafe should respect marriage equality as “the law of the land,” saying, “That’s where we are now. There’s no quotes around it. He’s my husband.”

Watch that now infamous video of Metcalfe freaking after being touched by his male colleague below.

Subscribe to Queerty for a daily dose of #politics #antigay #danielsmithjr. stories and more