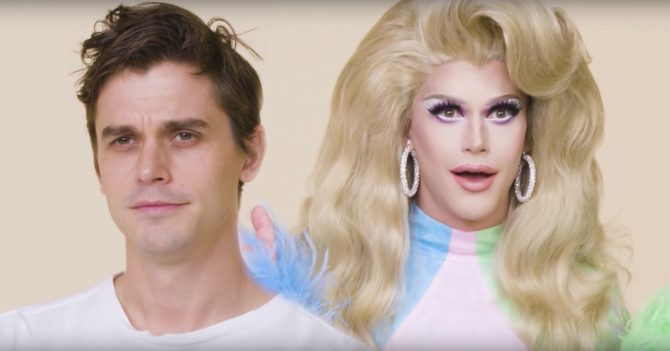 Queer Eye’s Antoni Porowski took a little break from the kitchen to swing by the set of the Drag Me for a special Pride edition of the hit web series, where he was given a dramatic drag makeover by none other than Miz Cracker.

As he was having his makeup done by the Season 10 contestant of RuPaul’s Drag Race, Porowski, who identifies as sexually fluid, talked about how Queer Eye producers and cast mates assumed he was gay when they first started shooting the series.

“It was a little intimidating when we started filming because it was just assumed that I was gay, even though that was never discussed during the chemistry testing in the whole audition process,” he explained.

Related: Antoni Porowski’s steamy Calvin Klein shoot was deleted from Instagram, but you can still it here

He continued, “I think the word that I’m most comfortable is fluid, and it’s so shocking to me how that surprises people. Call yourself whatever the hell you want to refer to yourself as! It’s not something that should be judged or questioned, but embraced.”

After his makeup was complete, Porowski was given a full drag costume, including a feather boa and wig, before adopting the alter-ego, Eva Cado, a reference to his love for avocados.

“You are a person that’s used to doing things with an egg timer, everything’s very regimented,” Miz Cracker said as she gazed upon her newly minted work of art. “I wanted to get you out of that.”

Afterwards, Porowski took to Instagram to share his iconic new look with his 3.4 million followers, along with the caption: “Das me! Thank you @them, @miz_cracker and @christiancowanfor providing a safe space where I could explore and learn about a side of me I kept deep inside. Happy Pride.”

Das me! Thank you @them, @miz_cracker and @christiancowan for providing a safe space where I could explore and learn about a side of me I kept deep inside. Happy Pride ??????? link in my story ??.