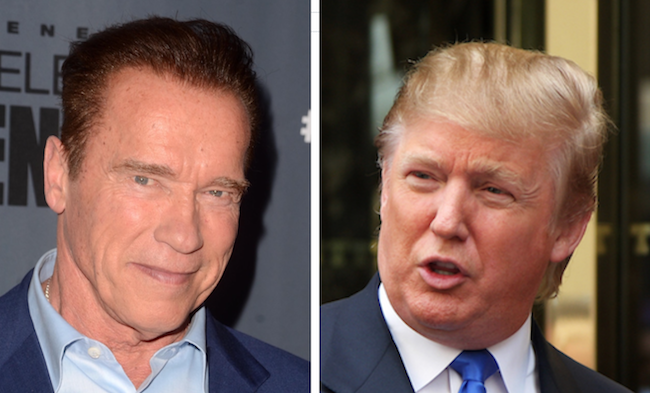 Arnold Schwarzenegger is pretty sure he knows why President Donald Trump appears so obsessed with him.

“I think he’s in love with me,” he said Tuesday, while guesting on SiriusXM’s The Michael Smerconish Program.

“Is that what it is?” Smerconish wondered aloud.

“Yeah, I think so,” Schwarzenegger said.

Later, he laughed when Smerconish mentioned his “long relationship” with Trump.

Trump has certainly had Schwarzenegger on the brain in recent months, repeatedly calling out the actor and former California governor, particularly after he took over hosting duties at The New Celebrity Apprentice.

Here’s one of Trump’s recent posts:

Arnold Schwarzenegger isn't voluntarily leaving the Apprentice, he was fired by his bad (pathetic) ratings, not by me. Sad end to great show

Later on in the interview, Schwarzenegger mused on how to navigate through America’s political divide:

“I believe very strongly what Eisenhower said, that politics is like the road. The left and the right is like the gutter and the center is drivable. And I believe that the action is in the center, and I hope that the politicians wake up one day and just decide that they want to do the people’s work rather than the party’s work. “

He also discusses why he is so keen on redistricting reform:

“The system is fixed. It’s rigged. And it’s not really serving the people well. So this is why I became a fanatic about redistricting because I saw the flaws here in California. And we have seen great changes since we have done redistricting reform here in the state.”