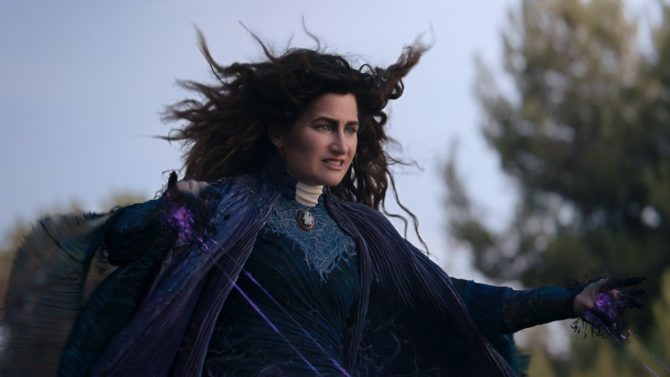 Edging her way ever closer to getting a full-on drag tribute at your local gay bar: WandaVision star Kathryn Hahn, the indelible actress and crooner that just took a joke song from the show to #1 on the iTunes charts.

WandaVision follows the character Scarlet Witch/Wanda Maximoff (Elizabeth Olson) on a surreal journey into an alternate reality inspired by decades of television sitcoms. Those shows run the gamut of TV history, beginning in the 1950s with a Dick Van Dyke Show parody, and following all the way to the present with a Modern Family spoof. In the show, Hahn plays the nosy neighbor Agnes, later revealed as the psychotic witch Agatha Harkness. The plot twist comes in Episode 7 of the show, which ends with Hahn belting out a TV theme song parody, “Agatha All Along.”

As penned by Robert Lopez and Kristen Anderson-Lopez (composer-lyricists of the Disney film Frozen), “Agatha All Along” recalls the groovy beat of the TV theme to The Munsters, and details how Agatha has tormented Wanda over the preceding episodes. Hahn herself recorded the song, belting out the lyrics with wicked relish.

Related: Gay Geek Gasp! Is the gay superhero Wiccan coming to the MCU?

What neither Hahn, nor anybody else for that matter, expected was that the song would become a surprise chart-topper. The Los Angeles Times reports that the song landed the #1 download spot on iTunes, and has nabbed more than 1.7 million plays on Spotify.

“I was also like, ‘What?’” she added. “Like, I don’t have social media, so the whole thing was filtered down through like all this — I was like, are you kidding me? So funny. Meanwhile, outside scooping dog crap, scooping cat crap. The whole thing is so bonkers right now.” [Hahn and her kids decided to foster kittens during the pandemic, which has kept her occupied, to say the least.]

“I mean, the whole thing is bonkers,” she added.

Hahn also said her kids have been mimicking her magical moves as Agatha. We–along with any number of queer folk we know–have been doing the same.

In addition to her work on WandaVision, Kathryn Hahn has starred in the comedy Bad Moms, Spider-Man: Into the Spider-Verse (as Doc Ock), and scored an Emmy nomination for leading the pro-transgender comedy Mrs. Fletcher. She also starred in a proposed American adaptation of Absolutely Fabulous, which never made it to series order.

Given the way drag queens have obsessed over Endora, Winnifred Sanderson and the Wicked Witch of the West for decades without tiring, we have a feeling we’ll see Agatha Harkness land that level of popularity in the near future. Hell, those witches didn’t even come with their own theme song!

And she killed sparky too…